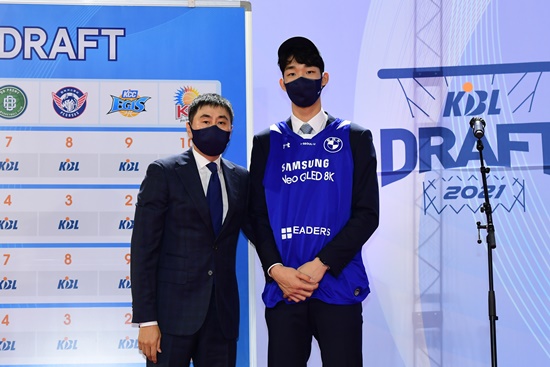 Lee Won-seok (21 · 207 cm) from Yonsei University, a second-generation basketball player, was selected by Seoul Samsung with the first overall pick in the KBL Rookie of the Year draft.

Samsung, who has the first overall pick, was the first to call Lee Won-seok’s name in the 2021 KBL Rookie of the Year draft held at Jamsil Student Gymnasium in Seoul on the 28th.

Lee Won-seok, who is the tallest among the 37 players participating in this draft at 207 cm, is also well known as the son of Lee Chang-su, a KBL match analyst from the national team.

Lee Won-seok said, “I would like to thank manager Lee Sang-min and the club officials for choosing me,” he said.

Suwon KT, who has the second pick right, selected Korea University Center Ha Yoon-gi (203 cm). 3rd place Goyang Orion chose Yonsei University guard Lee Jeong-hyeon (188 cm). Ha Yoon-gi and Lee Jung-hyun are promising players who have already been selected for the senior national team. He was even mentioned as the first overall pick ahead of the draft.