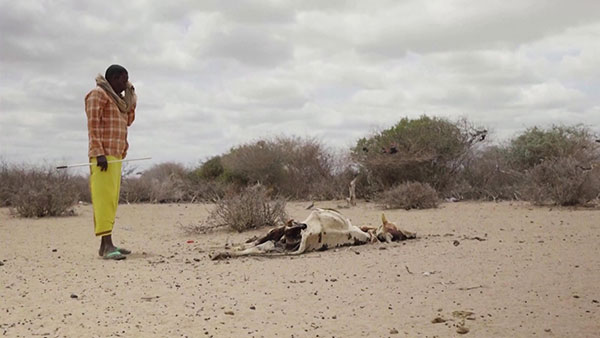 A shepherd stands in disbelief in front of a corpse of a cow with its bones exposed.

Not only cows, but also donkeys and goats, there are carcasses of animals everywhere.

Kenya, Africa, is suffering from the worst drought in 40 years.

Although extreme weather events such as drought and floods are afflicting the poorest countries in Africa, analysis has shown that they are not actually responsible for climate change.

Oxfam, an international aid and development organization, made this statement in a report titled ‘Hunger in the Warming World’ on the 16th local time, urging the countries responsible for climate change to take an active role in solving the problem.

According to the report, the impacts of climate change are concentrated in 10 countries: Somalia, Haiti, Djibouti, Kenya, Niger, Afghanistan, Guatemala, Madagascar, Burkina Faso and Zimbabwe.

The number of people living with food shortages in these countries increased by 123%, from 21 million in 2016 to 48 million last year.

The damage caused by drought and floods is also severe, so this year is the worst drought in 40 years in Somalia.

More than 1.5 million children under the age of five suffer from acute malnutrition, and 386,000 of them are at risk of dying without prompt treatment.

With no rain in Guatemala, corn yields fell by 80% this year alone, and coffee production was disrupted.

In Afghanistan, heavy rains in August killed dozens and Haiti is struggling with food production due to storms.

But the inconvenient truth is that those countries that suffer the most from climate change are in fact least responsible for it.

Oxfam notes that 10 countries emit only 0.13% of global carbon emissions.

On the other hand, the 20 leading countries, which dominate 80% of the global economy and are at the center of all industries, emit more than three-quarters of their total emissions.

That’s 650 times the emissions of the least developed countries.

Many oil and gas companies, which are considered the main culprits of environmental pollution, have been found to generate profits of US$2.8 billion, or about 3.8 trillion won, per day for the past 50 years.

Oxfam points out that this phenomenon is a stark example of global inequality.

He called for all the wealthiest countries most responsible for climate change to come forward, providing emergency aid to these countries and raising funds to help them prepare for the next disaster.

He also urged efforts to comply with the Paris Agreement on Climate Change, which compensates for the damage that has already occurred and prevents the global average temperature from rising by more than 1.5 degrees Celsius above pre-industrial levels.

Oxfam International President Gabriela Booker said: “The rich countries responsible for the pollution have a moral responsibility to reward the low-income countries most affected by the climate crisis, and this is an ethical obligation, not a charitable act.”

After Amr Adeeb’s economic advice… Is the next scary and what’s better?