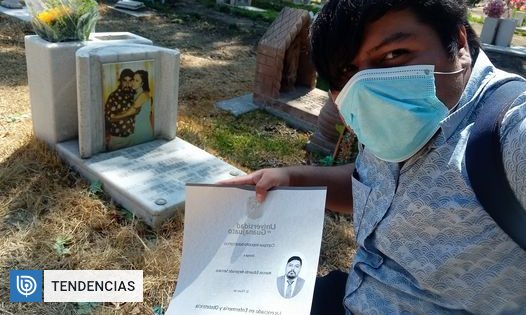 Media in Mexico reported an emotional story that went viral a few days ago, since a young man traveled to his parents’ grave and dedicated his nursing title to them, which he obtained this year.

Is about Marcos Eduardo Mejorado Serrano, who at the age of 28 was able to finish a degree in Nursing and Obstetrics at the University of Guanajuato, despite all the family problems she had.

In conversation with the newspaper El Universal, the boy said that in 2008 he lost his father in a traffic accident and his mother fell ill with cancer years later.

Unfortunately, in 2021 Marcos’s mother also died, due to causes derived from her cancer. Just before that, he had promised that he would dedicate his nursing degree to her.

“I would tell my parents that Yes it was possible, thank God for giving me life to get to this moment, Well, they gave me the opportunity to finish, that they have made me a responsible and good person, “he said.

“Besides, I think promises are to keep them, so I am very happy to have achieved it, ”he added.

Marcos is currently working in a company called SRG Global, which is located in the town of Irapuato.

It should be noted that the image shared on Facebook has achieved thousands of likes and comments in the last three weeks, which has been appreciated by the young man.