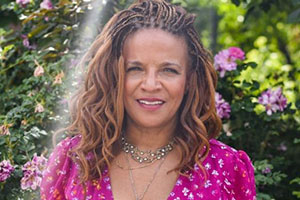 Tamara Thermitus, the author of this article. Source: LinkedIn

While the judge Ketanji Brown Jackson is the first black justice to be appointed to the Supreme Court, I hear the voice of Maya Angelou when she recited her poem “Yet I rise”.

Yet I rise
You can put me down for history
With your bitter and twisted lies,
You can drag me through the mud
But like the dust, I rise again,
(…)
You can bring me down with your words,
Carve me with your eyes,
Kill me with all your hate,
But like the air, I rise again.

Because, despite the vicious attacks, the judge has risen. Who can forget her appearance before the Senate Judiciary Committee during which she was the target of behavior never seen before. To prevent the inexorable march towards change, elected Republicans have not hesitated to use the vilest tactics. It is not the first time that they have reacted in this way to the presence of competent black people who are perceived as a threat to the historically established order. Remember the attacks on Kamala Harris, Barack and Michelle Obama.

Dr. Emmitt Riley III, professor of political science and African studies at DePauw Riley University pointed out: “Every time black people are brought up in a space for the first time, they face unprecedented opposition”.

Surreal was the intervention of the Republican Senator, Lindsay Graham, who asked the judge, one of the most qualified jurists the Court has recently known, to define the word “woman”. And what about the aggressive salvos of Senator Ted Cruz. This nomination process was like an elevator to the scaffold.

Highly publicized attacks inflicted by the guardians of democracy that the whole planet has witnessed. Waves of violence and hatred for a judge whom the president asked to serve his country. President Biden has also denounced the treatment of Judge Jackson. For him, it “was verbal abuse, anger, constant interruptions in addition to vile and baseless assertions and accusations”.

The president talks about verbal abuse, but wouldn’t it be more accurate to simply talk about violence?

This unjustified violence had a goal: to make Judge Jackson-Brown lose her temper in order to qualify her as an Angry Black woman. A turnkey stereotype, to discredit her.

This stereotype portrays black women as hostile, aggressive, bossy, illogical, cantankerous, and moody. These fantasies have permeated the collective unconscious, culture and society as well as the workplace, shaping the professional lives of many black women in particular.

The watchword, Judge Jackson knows it: at all costs do not respond to violence. With dignity, the judge behaved. Tears, she shed. But any human being would have reacted. Because, as a black woman, she knows that reacting to violence would have been professional suicide. Her skills and her hard work would have gone to waste and she would have missed her appointment with History: the role where she was not expected would have escaped her.

After being publicly humiliated, dehumanized, she kept her cool like a superwoman. The words of Élise Dorlin come to mind, she who wonders about the notion of defense as being the prerogative of some. Thus, self-defense is allowed for some bodies and denied to others, and in particular to racialized bodies, these indefensible bodies therefore subjected to violence.

For Dr. Niambi Carter, professor of political science at Howard University, the “backlash” that these women experience is classic “misogynoir”. “The idea that (these women) are somehow poor choices or inferior to others has nothing to do with their qualifications,” he explains. “It’s about racism and of sexism. A societal violence, therefore.

As Mikki Kendall, the author of Hood Feminism: Notes From the Women a Movement Forgot, “black women in American society are effectively expected to fulfill two roles at work, one for which they were hired and another consisting in making their colleagues feel comfortable. It is not enough to be educated, accomplished and professional. To overcome the obstacles created by racist stereotypes, they must also hide their emotions. Also, they can’t be too talented or assertive, lest they be perceived as a threat. Like Jackson, they’re in a no-win situation and just have to protect themselves, like she did. »

But not responding to violence comes at a price. That of the trauma, not only of the judge, but also of all those who witnessed this democratic carnage.

Despite everything, Judge Jackson was appointed. Finally, a black judge will be able to exercise power in the highest court. We are in 2022. It was high time.

A diverse judiciary does not necessarily mean that women and minorities behave differently from other judges, it emphasizes mere presence within the judiciary, which gives it legitimacy. One can only hope that the presence of the judge is a real representation, because women and minorities have different points of view based on different experiences linked to their identity. For diversity to have a real contribution to the justice system, judges must, through their experience, be able to understand inequalities.

The presence of Justice Jackson Brown in a predominantly conservative Supreme Court may not be the ideal situation. Probably, she will have to write dissenting opinions, but her dissents can become the bedrock of change. Thus the decisions and dissents of Judge Jackson Brown, as Maya Angelou said, will carry “the dream and the hope of the slave”.

Medal holder queen elizabeth jubilee (2012), Me Tamara Thermitus Ad.E has received numerous awards including the Merit of the Barreau du Québec (2011). She is the first black lawyer to be awarded this recognition. This article first appeared on the Pivot media website.

Worried about the epidemic, the intestines are also emotional! Sometimes Constipation Sometimes Diarrhea Does Irritability Make You Thin? ｜Health 2.0

La Chaux-de-Fonds frees itself from its toxic loans