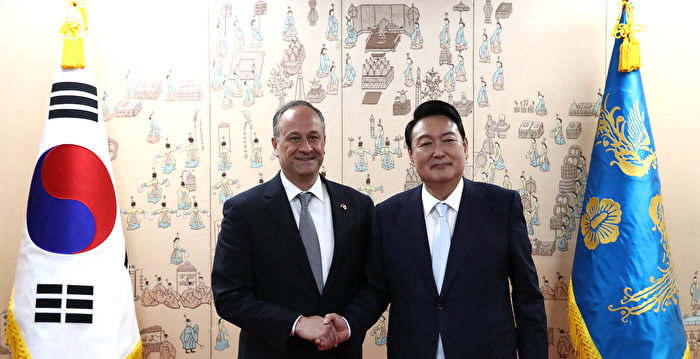 [The Epoch Times, May 13, 2022](Comprehensive report by Xu Yiyang, reporter of The Epoch Times Special Department) The new president of South KoreaYin XiyueOn May 10, the CCP took the oath of office, and the CCP rarely sent high-level leaders to attend; at the same time, the United States also reiteratedAmerica and KoreaThe Importance of Allies, PresidentBidenWill visit Korea soon. South Korea is an important link in the global semiconductor supply chain, and its presidential change affects the nerves of both China and the United States.

Yin XiyueHe will take over as Moon Jae-in on May 10, 2022, and officially become the 20th President of South Korea.In the afternoon, Yin Xiyue met with the Vice President of the Communist Party of China at the Presidential Palace in Yongsan, Seoul, South KoreaWang Qishan。

Wang QishanIn the meeting, he said that China is willing to work with the ROK to jointly promoteChina and KoreaStrategic partnership.

Yin Xiyue said that after he was elected president, he received a personal letter and phone call from Chinese President Xi Jinping. He also said that Wang Qishan’s attendance at the inauguration shows that China attaches great importance to South Korea-China relations.

When Wang Qishan went to South Korea this time, the CCP’s specifications were higher than before. Chinese state media said that Wang Qishan was the special representative of Xi Jinping to lead a delegation to South Korea to attend the inauguration ceremony of Yin Xiyue.

China News Weekly, which is owned by China News Agency, the mouthpiece of the Communist Party of China, issued an article on May 10 saying that since the new crown epidemic (CCP virus epidemic) has spread globally, this is a rare occasion for China to send a high-level CCP state leader to participate in foreign leadership. Inauguration ceremony.

The article said that compared with the list of guests from the United States and Japan who attended Yin Xiyue’s inauguration, the Chinese side’s standards were also higher. The United States sent a delegation led by Douglas Emhoff, husband of Vice President Kamala Harris, and Japan sent Foreign Minister Lin Fangzheng to participate.

The article also quoted Li Jiacheng, an associate professor at the School of International Economics and Politics of Liaoning University, as saying that this year is theChina and KoreaOn the 30th anniversary of the establishment of diplomatic relations, China hopes to anchor the path of stable development of China-ROK relations at this time.

At the same time that Yoon Seok-wook was inaugurated as South Korea’s president, the State Department reiterated the importance of the U.S.-South Korea alliance.

The U.S. State Department spokesperson told South Korean media Yonhap News Agency on May 9 that the U.S. looks forward to continuing to work with South Korea under the leadership of Yoon Sek-yue to address various challenges facing the U.S.-South Korea alliance.

The spokesman, who spoke on condition of anonymity, told Yonhap News Agency that the U.S.-South Korea alliance is the key to peace, security and prosperity in the Indo-Pacific region, and the U.S. side expects continued U.S.-South Korea cooperation in addressing the most pressing global challenges.

State Department press secretary Ned Price said the U.S.-South Korea alliance has remained strong no matter who the two leaders are. “Our alliance with South Korea is durable, and its durability is based on shared interests and shared values,” he said at a news conference that day. “It doesn’t depend on who is in power at any given time.” “

U.S. President Joe Biden will begin a three-day visit to South Korea on May 20 before heading to Japan.

Biden will hold summit talks with Yin Xiyue and Japanese Prime Minister Fumio Kishida during his trip. He will discuss with the heads of the two countries deepening the security alliance, strengthening economic ties, North Korea and other issues.

The South Korean media “Asia Daily” quoted analysts as saying on May 3 that Biden’s trip is expected to negotiate with Yin Xiyue on strengthening economic and technological alliances. After the Biden administration came to power, it strengthened cooperation with allies and stabilized the supply chain of high-tech industries such as chips. South Korea is the main partner of the United States. Therefore, the economic agenda of Biden’s trip has attracted attention.

In its mouthpiece media, the CCP explained why this time it sent Wang Qishan to South Korea at a higher standard than in the past, so as to actively win over South Korea.

The article in China News Weekly mentioned above stated that since South Korean President Moon Jae-in came to power in 2017, while maintaining the alliance between the United States and South Korea, he “actively repaired and developed the THAAD anti-missile defense that was previously caused by South Korea’s deployment. The systematic and sharp decline of China-South Korea relations.”

And Yin Xiyue, who was born in the National Power Party, is likely to continue the traditional conservative line after taking office. Yin Xiyue has said that it will strengthen the South Korea-US military alliance, and urge South Korea-US relations to be upgraded to a comprehensive strategic alliance.

The article said that after Yin Xiyue won the election, he first sent a delegation to visit the United States. U.S. President Joe Biden is also scheduled to visit South Korea on May 20. In terms of political cooperation, the challenges to China-ROK relations are severe.

South Korea has long relied on the United States for security and China for economic and trade, trying to keep politics out of business. But U.S. pressure has left South Korea in a delicate balance between its longtime ally and largest trading partner amid a shifting geopolitical situation, as Washington and Beijing battle each other over technology.

South Korea’s advanced semiconductor industry is witnessing a surge in global demand as consumer electronics sell out during the pandemic.

Jose W. Fernandez, Undersecretary of State for Economic Affairs of the U.S. Department of State, said while attending the 6th Korea-U.S. Strategic Economic Dialogue (SED) at the South Korean Foreign Ministry Building in Seoul on December 17, 2021 that the CCP’s new crown virus The semiconductor shortage caused by the epidemic has made South Korea a leader and an important partner in the global semiconductor supply chain. He said that South Korea is an indispensable partner of the United States in the global semiconductor supply chain.

At the meeting that day, the two countries had extensive discussions on supply chain restructuring, infrastructure construction and other issues. During the period, the United States has constantly emphasized the importance of South Korean companies in the global semiconductor supply chain in order to contain the CCP.

Fernandez’s visit to South Korea comes as the Biden administration has been uniting allies and partners to forge a global supply chain that does not depend on China.

For very soft and delicate hands, in detail a hand care routine in simple steps, you will notice the big difference