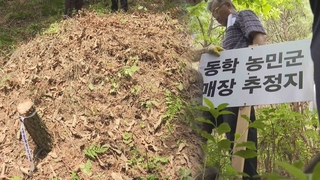 It has been 128 years since the Donghak Peasant Movement took place.

There are testimonies that 180 remains of Donghak peasant army are buried in the middle of a hill in Sancheong, Gyeongsangnam-do.

Historians and related groups have called for the excavation.

When the trees are cut down and the grass is cleared, the shape of what appears to be a mound begins to emerge.

In the vicinity, these large and small tombstones are found in several places.

128 years ago, the Donghak peasant army was annihilated by the Japanese and Joseon government forces, and it is presumed that this is the place where their remains were collectively buried.

According to the Sancheong Donghak Peasant Revolution Memorial Project Association, it is known that about 500 Donghak peasants revolted in Naedae-ri, Sicheon-myeon, Sancheong-gun in April 1894.

“I heard it through my father, but my grandfather said that he was killed by the Donghak Peasant Army on November 23, 1894 as a treason. I heard it was buried.”

According to the testimony, it is estimated that there are about 180 ashes buried here, and it seems that the Donghak peasant army after the Battle of Sugok in Jinju and Battle of Goseungdang in Hadong hid in the Jungtaeri Valley and was annihilated by the Japanese.

A historian who accompanied the scene also considered the testimony to be credible.

“Since it is the testimony of my grandfather, I think it is necessary to check how reliable it is in the literature, but there is a possibility that the testimony is true if we look at the flow of existing historical documents.”

The Commemorative Business Association urged the excavation of the massacre site through a press conference.

“Who are they? They are our ancestors who cried out for national security. We are requesting the excavation of the massacre site first by disclosing the testimony of the residents of Jungta-ri to the media.”

They said that if the local government helps the excavation, they will form a committee and actively cooperate with the preservation and succession of the remains.