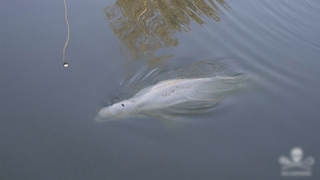 A beluga, also known as a beluga whale, has recently been trapped in the Seine River in France and has been unable to get out of the sea.

It is a sad news that he died during the transport operation to rescue the beluga.

It is delivered by Bang Joo-hee PD.

A white whale swims close to the surface, revealing its body.

The first sighting of a beluga in the Seine River in France was on the 2nd.

Experts judged that the beluga would not be able to return to the sea on its own, so the French authorities launched a beluga rescue operation.

They decided to put it in a net, take it out of the water, and put it in a special refrigerated vehicle to return it to the sea.

In order to safely move the 4m long and 800kg beluga, 80 people, including veterinarians, animal experts, and divers, participated in the rescue operation.

After six hours of work, the beluga appeared on the net.

After the medical examination, he was transported to a truck and began to have difficulty breathing while moving slowly to the port.

Experts eventually decided to euthanize the beluga when they saw that it was visibly in pain.

“The beluga’s breathing activity deteriorated during the movement. We found out that he was not breathing enough due to lack of oxygen.”

It is very rare that the beluga, which lives mainly in the cold Arctic Ocean, descends as far as the warm Seine, 3,000 km away.

A beluga, who lives and moves with her family, loses her life while wandering in an unfamiliar place alone, causing the sorrow of many people.

Diabetic patients are 25 times more likely to be blind than normal people… Why? [눈+사람]