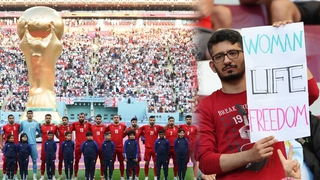 Anti-government protests spreading in Iran have even blown into the World Cup.

Whenever the Iranian national team is playing, there are endless voices criticizing the government and demanding freedom around the stadium.

This is Reporter Jeong Ho-yoon.

In front of the stadium ahead of the second match of the group stage, Iranian football fans scream at the top of their voices.

The anti-government protests that started after the so-called ‘college student case’ in which she was arrested and killed for not wearing a hijab last September continued to the World Cup.

“I don’t have any other clothes. What are you going to wear?

Iranian national team players did not sing along with the national anthem in solidarity with the protests before the start of the first game, and fans in the stands drew attention by painting tears of blood on their faces.

Ahead of the match against Iran, the U.S. soccer team posted an Iranian flag with Islamic symbols removed on its official social media account, explaining that it was a measure to support anti-government protests.

“It’s about human rights. The Iranian government is taking away our basic human rights and killing us in the streets just for demanding freedom.”

The Iranian government is taking an even tougher stance, with reports that even the supreme leader’s nephew was arrested for criticizing the regime.

The December zodiac fortune is public. People who belong to the dragon should not steal food “the consequences are difficult to deal with” | Life | CTWANT

Health reveals symptoms of infection with the syncytial virus.. Details