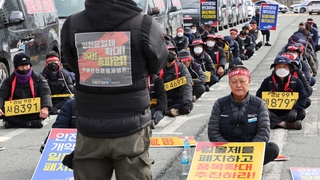 The cargo union general strike is in its second week.

The Cargo Solidarity is protesting the government’s tough response by holding relay propaganda campaigns throughout downtown Seoul, but the government is still urging a return to work by announcing its strict response policy.

This is reporter Han Chae-hee.

Members of the Cargo Solidarity gathered at the headquarters of the three oil refiners in Seoul.

The police block the doors of these companies and guard the front of union members shouting slogans.

They insisted on the abolition of the safe fare system sunset system and demanded that the negotiations proceed with the management.

With the general strike entering its second week, the cargo unions are holding simultaneous rallies across the country to continue the strike’s driving force.

Previously, the Korean Confederation of Trade Unions argued that “the level of oppression to neutralize the struggle is going too far” and that “the consensus that this should be stopped is expanding.”

The cargo union filed a complaint with the Human Rights Commission to withdraw the government’s business start order, but it was rejected, and the Seoul Administrative Court filed a lawsuit against the Minister of Land, Infrastructure and Transport to cancel the business start order.

The government maintains a firm stance that it will take strict action, including administrative disposition, in case of non-compliance with the business start order.

In particular, it is a policy to ensure that investigations and punishments are carried out for illegal acts, so the confrontation between the government and the government is expected to continue for the time being.

This is Han Chae-hee from Yonhap News TV. ([email protected])

Georgia’s victory.. What does the majority of the “senators” mean for the Democrats?