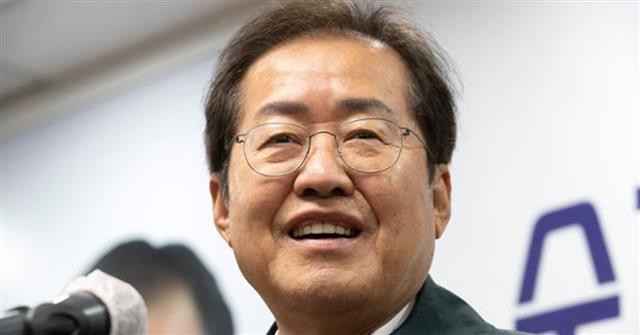 Representative Hong Jun-pyo of People’s Strength delivers a greeting at the disbanding ceremony held at the Yeouido primary camp in Seoul on November 8, last year. By Oh Dae-geun

The anticipation for the formation of the ‘one team’, which had been expected due to the meeting between the presidential candidate Yoon Seok-yeol and his rival, Hong Jun-pyo, went back and forth between hot and cold baths. After the two people’s dinner on the 19th, the team composition seemed to be moving rapidly, but the fact that Rep. Hong requested a nomination for a by-election for a close aide became belatedly known, and the atmosphere froze in half a day. On the 20th, Candidate Yoon expressed his refusal to do so, saying, “I will do the nomination in principle.”

According to the People’s Power predecessor headquarters, Rep. Hong proposed to Yoon the day before that they should strategically nominate former Auditor General Choi Jae-hyung in Jongno, Seoul and Lee Jin-hoon, former head of Suseong-gu, Daegu Jung and Nam-gu, respectively. The condition for joining the previous script, which Rep. Hong revealed immediately after the meeting, was a public declaration of Candidate Yoon’s (1) guarantee of state management ability and (2) ‘severe corruption of his wife’. However, there was a demand behind the scenes of ‘strategic nomination of close associates’. Former president Choi and former district mayor Lee supported Rep. Hong during the party’s presidential primary.

Candidate Yoon met with reporters at the Yeouido office on the same day and drew a line in relation to Assemblyman Hong’s request, saying, “I have no intention of directly getting involved in the nomination issue.” “The nomination is a symbolic thing that shows the attitude and method of a party’s election campaign,” he said. Previously, Kwon Young-se, the party’s secretary-general, the former head of the campaign, poured out criticism of the intention of targeting Rep. Hong. At the National Assembly, he warned, “If you show an old fashioned state, you will not be recognized as a party member, let alone your qualifications as a leader.”

Hong Joon-pyo, who was driven to old age, aimed at Kwon Young-se, “to be self-indulgent”

Candidate Yoon, who has worked hard to join Rep. Hong to form a one-team team overcoming the internal strife of the party, expressed an exceptionally firm stance because he feared that the image of ‘fairness and common sense’ would be damaged. In the process of a rebound in approval ratings, it seems that the judgment that if Rep. Hong’s demands were unreasonably met could lead to a headwind.

“It’s a pity that the picture I had hoped for with Rep. Hong did not come out,” said an official from the predecessor’s headquarters. It seems that the attack on ‘this man (a man in his 20s)’, which was focused on Rep. Hong, also took into account the fact that there is no reason to cling to Rep. Hong as he partially recovered after the conflict with CEO Lee Jun-seok was closed.

Rep. Hong, who was driven as ‘old-fashioned’ by the predecessor headquarters, did not hide his displeasure. He met with reporters at the National Assembly Hall and said, “If you nominate a person like former Director Choi in Jongno, you can supplement the government’s ability because it is clean and has excellent administrative ability.” claimed to be part of The explanation is that it also meets the conditions for joining the previous script, which were released the night before. He also raised his voice to the general director of the election campaign, saying, “If there is a difference of opinion (with respect to the nomination), we have to discuss it internally and sort it out.

It’s creaking right now, but it’s too early to say that Yoon’s concept of ‘one team’ is completely wrong. In this presidential election, where a close match is expected, candidate Yoon needs to gather one more vote, and there is no justification for Rep. Hong to refuse support. This is why Lee Yang-soo, senior spokesperson for the predecessor headquarters, clearly drew a line on the nomination on this day, but left room for saying, “I can make a public declaration (in relation to the problem of the wife proposed by Rep. Hong)” and “Rep. Hong is a precious adult of the party.”

Candidate Yoon also plans to reach out to other contenders in the primary. He also said, “I’m trying to keep in touch” about Yoo Seung-min, and I met with Choi for 50 minutes at a hotel in Seoul that afternoon. This is to resolve the controversy over the nomination that arose out of nowhere and strengthen the will to cooperate. Choi, who expressed his support for Candidate Yoon in November last year, said, “I have never discussed running for Jongno with Rep. Hong.

UK health minister says 20,000 will die from flu, but no lockdown

France to lift most restrictions against Covid-19 in February