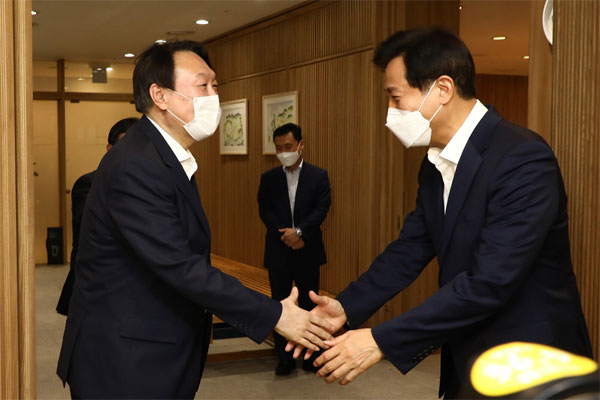 On the 26th, Chairman Lee met with reporters immediately after the party’s Supreme Committee meeting and said, “I’m not the type to exaggerate, but if I follow what I heard yesterday (from former President Yoon), I think I’m sure about joining the party.” In addition, regarding the appointment of four incumbent party chairpersons, including former lawmaker Park Min-sik, to the presidential campaign for former president Yoon, “If the primary train departs without former president Yoon joining in August, of course, public opinion on expulsion (for the chairman of the party association) will be heated “I have no choice but to do it,” he said. “The parties also said they have no doubts about joining the party in August.” Regarding the rumors of joining the party with a specific date of ‘around August 10’, a line was drawn, saying, “(Time) has not been suggested.” Former President Yoon’s side is not talking about the specific date or time of joining the party. He mentioned “the time of decision is coming” right after having dinner with CEO Lee the day before, but he added to the reporters that day, saying, “Meeting many people, it means that the time for me to choose a political path seems to be near.”

There were also voices expressing displeasure over the fact that former president Yoon, as an independent, recruited former and current members of the People’s Power to power the party, among the ruling party leaders. A lawmaker Joong-jin, who supports former Auditor General Choi Jae-hyung, pointed out, “Even if I helped former President Yoon, I had to help after joining the military first.” He pointed out, “There is a problem.”

The party leadership is starting to review the disciplinary action against them in consideration of equity and other factors, while pressing for Yoon to join the party in August. This is because joining a camp outside the party can be a cause for disciplinary action, as the Supreme Council previously allowed party members and the chairman of the party association to participate in the ‘in-party’ presidential campaign. Secretary-General Han Ki-ho said, “We will review whether this is a reason for the resignation of the party chairperson.” High Commissioner Bae Hyun-jin also said, “Ex-President Yoon is expected to show a quick stance in order to ease the burden of the party chairpersons who participated in the camp.”

On the other hand, the former president’s support group raised all 2.565.45 million won in one day, the first day of fundraising. Former President Yoon said, “I think it is the support and encouragement of the people to restore the sense of emergency and live a predictable and comfortable life. I am deeply grateful.”