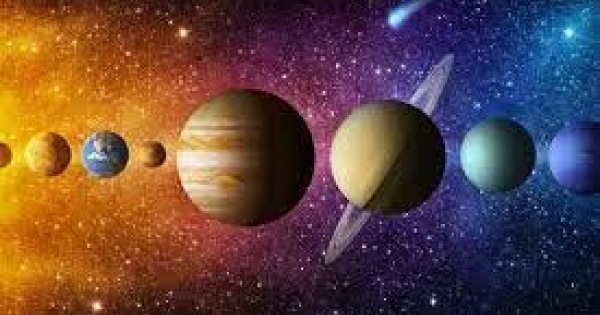 Based on this, you might think that the larger planets in the solar system have more gravity, but it is not that simple, there is another factor that determines the strength of the planet’s gravity is the amount of its density. If the density is low, its gravity may not be as strong as expected.

How do we calculate the gravity of the planets?

Beginning to understand gravity in other planets It is always easier to compare it to the gravitational force of the planet we live in and experience its gravity on a daily basis.

This means that the falling object will fall 9.81 meters every second it falls, assuming no resistance from the air.

Now let’s start by comparing the gravitational force of the planets of our solar system:

The most massive planet

Jupiter is the largest planet in our solar system, and thus also has the strongest gravitational field of all the planets.

The only celestial body in the solar system whose gravity exceeds that of Jupiter is the sun.

Jupiter has a mass of about 318 times that of Earth, yet its surface gravity is not 318 times stronger.

The force of gravity on Jupiter’s surface is two and a half times that of Earth, or 24.8 meters per square second.

Jupiter has a relatively low gravity compared to its mass; Because it is not a very dense planet; Jupiter is mainly composed of the two lightest elements; hydrogen and helium.

Since Jupiter is composed almost entirely of light elements, it has a low density and therefore a low surface gravity as well.

If you were to somehow stand in the upper layers of Saturn’s atmosphere, you’d experience a gravitational force a little stronger than Earth’s. If you drop an object, it will accelerate downward at a rate of 10.44 meters per square second. Like Jupiter, Saturn’s relatively small gravity is due to its low density.

In fact, Saturn is the least dense planet in the Solar System, and has less surface gravity than Neptune.

Uranus is about 14.5 times larger than the planet Earth, yet its surface gravity is less than Earth’s, because – like all other gas giants – it has a relatively low density, and therefore the surface gravity will be weaker than Earth’s. If you drop an object from the tops of Uranus’ clouds, it will accelerate downward at a rate of 8.69 meters per square second.

Neptune is the farthest planet from the sun with a mass about 17 times the mass of Earth. As a gas giant, Neptune has a very low density, and therefore a relatively low surface gravity. Without any air resistance, the object would fall from Neptune’s upper atmosphere at a rate of 11.15 meters per second squared. The gravity of Neptune’s surface is 1.14 times that of the Earth’s, according to the . website World Atlas.

Mercury, the closest planet to the sun, is also the smallest and least massive planet in the solar system.

Mercury has a mass of only 0.055 times that of Earth, but despite this small number, Mercury has a surprisingly strong surface gravity thanks to its high density.

The closest planet to Earth is Venus, and it happens to be about the same size and mass as Earth. Venus is about 95% the size of the Earth and 80% the mass of the Earth.

Mars is similar to Earth in many ways, but much smaller in size and mass.

Mars is only 0.1 times the mass of Earth, and its surface gravity is not much greater than that of Mercury. But Mars is a rather dense planet, so the gravity of its surface is probably greater than you might expect. On the surface, you would experience a gravitational force of 3.71 meters per square second, or about 0.38 times that of Earth’s surface gravity.

iQIYI’s “Meng Tan Tan Case” returns strongly in the second season, and the three major upgrades will create a “decompression variety show” for the whole people-Qianlong.com.cn