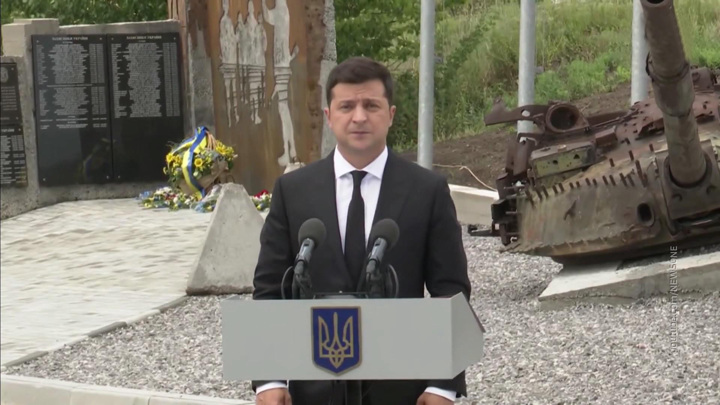 Nord Stream 2 theme these days it will be heard again in Ukraine, where Frau Merkel is expected tomorrow, on the eve of Independence Day. And today, at the invitation of President Zelensky, Patriarch Bartholomew of Constantinople, whom millions of Ukrainian believers call “the destroyer of Orthodoxy”, arrived for the holiday. And although he was officially called as a spiritual leader, in Kiev he solves exclusively political problems. The agenda of the summit is the situation in Donbass and relations between Kiev and Moscow. Bartholomew was greeted in the streets with mass actions. Amid the street protest noise, Zelenskiy gets rid of the opposition media. Undesirable bloggers and online publications are now banned.

It seems that the Patriarch of Constantinople in Ukraine was only waiting for Vladimir Zelensky… Figures of arts, sports and science asked Bartholomew not to fly, and thousands of Orthodox Christians with posters against him lined up along the road from the airport to Kiev. They also came to the Verkhovna Rada. With a reminder to the Patriarch of Constantinople about the consequences of his decision to grant autocephaly to Ukraine, in fact, to recognize the split of the Ukrainian Church. The police began to seize the banners and detain the believers.

While in Kiev the people were saying such words about Bartholomew (“Ukraine is washing with blood that you brought us”), Volodymyr Zelenskyy discussed with him not at all religious topics: the war in Donbass, the confrontation with Moscow. They did not talk about the seizure of churches by neo-Nazis. But this also worried those gathered at the walls of the Rada.

The wave of attacks in the Square was just provoked by Bartholomew’s decision to support the split. Even Bartholomew’s visit is tied to the 30th anniversary of the country’s independence. He and his autocephaly are like another symbol of this independence needed by the Ukrainian authorities.

But the canonical Ukrainian Orthodox Church of the Moscow Patriarchate has the broadest support, which the schismatics never dreamed of with Bartholomew. For example, at the end of July, about 350 thousand people took part in the events in honor of the Day of the Baptism of Rus in Kiev. At that time, opposition journalists were broadcasting the procession live. Zelensky with them sorted out with sanctions… Today he introduced them against the blogger Anatoly Shariy. Earlier, he closed three TV channels associated with deputies of the Opposition Platform – For Life party. One of the leaders of the party, Viktor Medvedchuk, was placed under house arrest. The day before, his case was sent to court.

“The independence of our country is 30 years old. Today we can say with confidence that responsibility before the law in Ukraine no longer depends on mandates, status, media empires or state. The law enforcement system is actually destroying the caste of untouchables,” said Iryna Venediktova, Ukraine’s prosecutor general.

So far, it seems that it is destroying only the real opposition. For example, the former President of Ukraine Petro Poroshenko, despite a heap of criminal cases, is at large. Preparing for the parade in honor of the 30th anniversary of independence.

It promises to be full. The Kievites were to be shown the newest tank “Oplot”, which first went to the rehearsal, pasted over with tape instead of camouflage, and then stalled. In Dnepropetrovsk today the show was staged by parachutists in red trousers, who promised to dance a combat hopak in the sky. But the perky dance, judging by the video, lasted about five seconds.

The preparation for the celebration of independence has already cost the Ukrainian budget 5 billion hryvnia. Now on the agenda is the question of the next loans. Zelensky, it seems, plans to discuss it with Angela Merkel tomorrow, just like the already completed deal on Nord Stream 2 between the United States and Germany. In the meantime, in anticipation, as if missing the audience, he arranges a new little show – he does 30 push-ups on the turnstile in honor of the upcoming holiday.