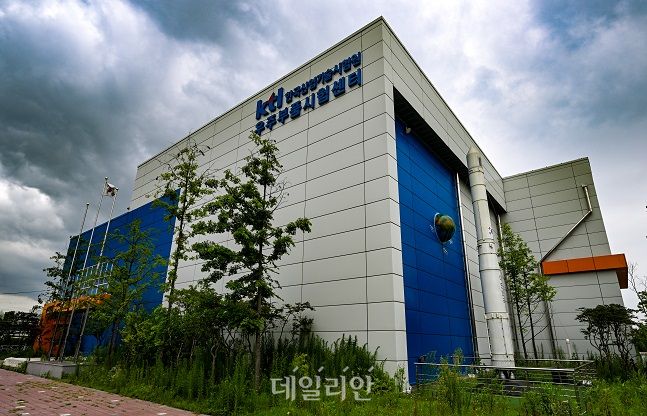 Jinju Sangpyeong General Industrial Complex arrived after a three-hour drive south from Sejong City. Upon entering the entrance, two huge buildings standing side by side caught the reporter’s eyes. One building is the ‘Space Parts Testing Center’ established for the era of private-led New Space, and the other building is the ‘Aviation Electromagnetic Technology Center’ built for the independence of core aviation technologies. Both centers are operated by the Korea Testing Laboratory (KTL), which has held a unique position in the domestic testing, certification, and evaluation fields. In line with the establishment of the Sacheon Aerospace Administration in Gyeongnam, as stated by President Yoon Seok-yeol, the industry is expecting that it will greatly contribute to fostering the aerospace industry and regional development.

The Aerospace Center, a ‘untraveled road’, was also an adventure for KTL. 27.1 billion won was invested in the construction of the center alone. In most cases, the establishment of affiliated institutions of public institutions is mostly covered by government and local funds, but KTL made a preemptive investment. Although there were internal differences in the business decision process, the decision was made to promote the local economy and revitalize the space industry.

Among them, the Space Parts Test Center was established as Korea’s first specialized testing and evaluation facility in the space sector in preparation for the rapidly growing space industry market. The space industry is emerging as an industry that is expected to create enormous added value by combining hardware infrastructure such as launch vehicles, satellites, and ground stations, products such as navigation equipment, satellite services, and software. The size of the global space industry is expected to reach $1.1 trillion by 2040. It will open a market worth 1400 trillion won.

Major advanced countries recognize the high value-added space industry as a growth engine of the national economy beyond the aviation industry. The government, newly entered this year, announced the development of the space industry to leap forward as one of the world’s seven largest space powers, and is promoting long-term plans and specific programs so that the private sector can lead the creation of the space industry ecosystem.

KTL’s space parts test center is expected to serve as the foundation and foundation for the space industry. The Space Parts Test Center provided 162 space environmental test and evaluation services to 40 domestic companies as of last year alone, a 179% increase from the previous year. In particular, it provided timely support for space environmental tests (orbits, etc.)

Park Jung-won, vice president of KTL, said, “The aerospace industry is expected to emerge in the future, and what KTL is doing now will become the basic strength and the root of the foundation.” We expect to be able to do this at KTL,” he said.

The Space Parts Test Center is attracting attention as it will contribute to the growth of domestic general managers (materials, parts, equipment). This is because the growth of the aerospace industry inevitably coincides with the development of the general manager industry.

In the aerospace industry that requires high precision, ‘reliability review’ is essential. It is also an area where success or failure depends on a 0.001% probability. However, if imported parts are used for space industry parts, access to key information is impossible, so there is a limit in that reliability reviews based on reliability data at the part level cannot be properly conducted.

For example, an aerospace company A requested data on the reliability of foreign parts, but it was reported that they received a reply from the overseas company saying, “If data is requested, we will not sell the parts itself.” In order to secure competitiveness in the aerospace field, reliability data that can guarantee the safety, precision, and quality of related parts must be accumulated, and this is only possible through a reliability review of parts of Korean companies.

Vice President Park said, “The aerospace industry is an industry where the heritage (legacy) that has accumulated a lot of know-how is important, so it is very important to know where it has been used and installed. It is very self-evident that it cannot be done.”

KTL is developing micro-satellites jointly with Jinju City and Gyeongsang National University to build the heritage of the domestic aerospace industry. Launching a microsatellite developed using domestic components into space is itself a simulation experiment and a demonstration test experience. Projectiles that will launch microsatellites are currently being discussed, such as the US SpaceX rocket and Nuri 3, but nothing has been confirmed yet.

Two of the four micro-satellites (developed by Seoul National University and Chosun University) mounted on the Nuri-ho, launched in June, were also tested and certified at the KTL Space Components Testing Center. Seoul National University and KAIST succeeded in two-way communication, Chosun University succeeded in one-way communication, respectively, and Yonsei University failed in communication. KTL advised that this should not be viewed simply in terms of success or failure, but should be used as a stepping stone for domestic small managers to be combined with the universe and nurture as a national industry.

In particular, it is argued that national policy nurturing must be accompanied by the growth of the space storage industry. A KTL official explained, “The general industry makes several products and one or two may fail, but the space industry is a very different field. did.

He added, “As a result, parts prices are high and companies or companies that jump into it are rare.

Inside the Space Parts Testing Center, Korea’s first specialized testing and evaluation facility in the space field has been established. All of them met the testing standards of NASA and the European Space Agency (ESA). Through this, it is expected that it will meet the private demand for the domestic space environment and create a synergy effect by localizing parts.

According to KTL, there are four major tests that simulate the space environment at the center. ▲ ‘Launch environment test’ to verify product performance by simulating the vibration and impact environment of a launch vehicle ▲ ‘Orbital environment test’ to verify extreme environments such as vacuum, sun exposure, and temperature difference between day and night ▲ Validation of electromagnetic interference performance in space environments such as solar wind It is classified into ‘Electromagnetic Environment Resistance Test’, ▲ ‘Device Test’ that verifies whether device-grade components operate stably during the life of the satellite.

At the launch environment test site that the reporter visited, a scene was produced that simulated exposure to shock and vibration through an impact tester that could actually hit a projectile.

A test room inside the Space Components Testing Center. ⓒKTL

In the orbital environment test lab, tests were conducted to prepare for exposure to extreme environments on orbit. In space in a vacuum state, an extreme temperature difference occurs between -70 and -120 degrees Celsius between the side where the satellite sees the sun and the side that does not see the sun. In other words, creating a vacuum is the key, but it is difficult to find a place in Korea that can simulate a vacuum and conduct a thermal shock test.

On the other hand, the KTL test center has an environment that can create a vacuum by removing the air inside the thermal vacuum chamber with pressure. Through this, a simulated cosmic thermal shock test that raises and lowers the temperature in a vacuum is possible.

Vice President Park said, “The KTL Space Parts Test Center, built as Korea’s first full-cycle test and evaluation facility for the space sector, is expected to provide a foothold for the Gyeongnam region to leap into a domestic space industry base.” It is expected that it will lay the foundation for localization through self-reliance of test technology and contribute to nurturing professional manpower in the space industry and balanced regional development.”

The male idol was exploded with fans and cheated again!The station sister has an angry conversation: I don’t want to tolerate you anymore | ETtoday Starlight Cloud | ETtoday News Cloud