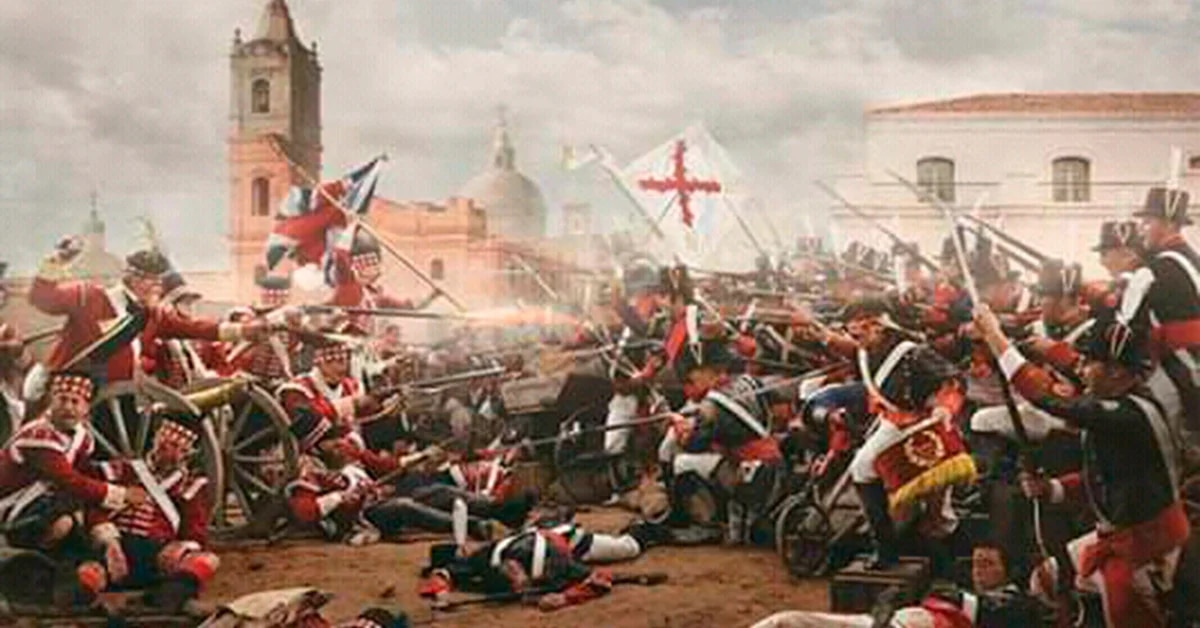 In the second invasion, he fought in the streets; barricades had been erected, trenches dug and on the roofs and rooftops the Creoles waited for the invader

The English decided to land in Ensenada because of its deep waters, which allowed their ships to maneuver. They did so on June 28, 1807, without opposition. Along 122nd Avenue they headed towards the current city of La Plata, where they camped. They continued their trip to the Quilmes area and spent the night in the house of Santa Coloma, now Bernal. They then reached Eva Perón avenue in Temperley and returned to rest in Banfield, near the football stadium. From there they headed towards the area of ​​what is now Puente de la Noria.

Another Quilmes column went to Sarandí and ended up crossing the river by the current Alsina Bridge, in those days known as Paso de Burgos.

The government put at the head of that army Lieutenant General John Whitelocke50 years old who, when saying Groussac, “probably the most inept chief of the English army; in any case, the least authorized and prestigious”. The king Jorge III he was not of the same opinion: the soldier had entered the army in 1778, five years later he was already a colonel. He fought in Santo Domingo commanding 700 men and took Port-au-Prince in 1794. He then served in India, Egypt and the Cape of Good Hope.

John Whitelocke was at the head of the English troops. After the defeat in Buenos Aires, a court-martial found him guilty and thus he ended his military career.

On May 10, Whitelocke arrived in Montevideo, under British control, and was anointed as governor and commander-in-chief of the British forces in South America.

Without taking into account the chiefs, officers and sailors, the troops that landed in Ensenada were 7822 men. They were united by the fact that these bosses and units had never fought together.

In Buenos Aires it was all convulsion. On September 5 of the previous year Santiago de Liniers -with the teaching that the first invasion had left him- He called for the enlistment of every man capable of firing a rifle. The call began on Wednesday, September 10 with the Catalans; on 11 the Biscayans; on the 12th the Galicians and Asturians; and the Andalusians, Castilians and Patricians on the 15th, in all cases at half past two in the afternoon.

Bullet and knife factories were set up and fortifications with batteries were built in Retiro, La Residencia, Barracas and Quilmes to face a possible landing. The rifles captured from the English in August of the previous year came as if they had fallen from the sky and the old existing weapons were repaired. From inside came barrels of gunpowder and every metal object was transformed into a projectile.

Santiago de Liniers showed that he had learned the lesson of the first invasion. By 1807 the city was better organized

On the afternoon of June 24, 1807, Liniers reviewed the troops that would defend the city. He left for Barracas with most of his army and on July 2 he formed up his men in battle on the banks of the Riachuelo. He saw the English vanguard under the command of the general mayor Levinson Gower. This, with smaller forces, evaded the confrontation and crossed the river much higher, with the water reaching their chest, where the Puente de la Noria is located today, and camped in the Miserere corrals, Plaza Once. A part of the defending army returned to the city and the rest, led by Liniers, went to the corrals. There he was attacked by the English and suffered 200 casualties, including dead, wounded and prisoners.

The role of Martín de Alzaga was key, who encouraged Liniers; he had hidden weapons, gathered people and organized the defense. He had barricades erected, he organized the neighbors, he had the city illuminated so that he could work non-stop. And he summoned Liniers to take charge of the men.

It was not understood why the British did not pursue the disbanded to the city. Gower remained in the pens; he was unaware of what was happening in the city, where everything was discouragement upon learning of defeat. In any case, he prevailed the idea of ​​resisting.

The next day, the Creoles rejected two summonses, one verbal and one written, in which the British gave half an hour to surrender. Still they did not enter the city. Yes, Liniers did it with his troops. Within a radius of five or six blocks from the Cabildo, he set up a line of defense, with trenches and barricades. On day 4 nothing happened either. The British decided to storm the city in the early hours of Sunday the 5th.

Sketch of the plan of the British attack on the city, on July 5, 1807 (Taken from the Complete Version of the Trial of Lieutenant General Whitelocke)

The 6,128 men were divided into 12 columns, each marching down a street: eight to the north of the cathedral and four to the south. Cangallo, Cuyo (Sarmiento), Corrientes, Lavalle, Tucumán, Viamonte, Córdoba and Paraguay. Those from the south entered through Moreno, Belgrano, Venezuela and Mexico. The plan was to cross the city from west to east, reach the river and take the most important buildings. The order was not to shoot civilians.

The column that was supposed to enter through Paraguay made a mistake and entered through the current Marcelo T. de Alvear and upon reaching the Retiro received accurate shots from two cannons, installed at the height of Paraguay and Florida. The English must have diverted through Córdoba, took a building and took a hundred prisoners. In the convent of Santa Catalina de Siena, in Viamonte and San Martín, they improvised a blood hospital to attend to their wounded.

The Residence, the Retiro barracks and the Catalinas fell into English hands, but not the Plaza de Toros, in the current Plaza San Martín, defended by a thousand men.

Columns entering from the south did not fare well. They wanted to seize the church of San Miguel and many were killed by rifle charges. Those who had entered Cuyo Street had to surrender.

From the terraces and roofs, men and women threw stones, boiling water and everything they had at hand. Stones from the cobblestones were used and Whitelocke would later recall that “vessels of fire” were thrown at them..

The English chief wrote: “Each owner, with his blacks, defended his dwelling, each of which was a fortress in itself; and perhaps it is not an exaggeration to say that the entire male population of Buenos Aires took care of his defense”.

One of the many battles fought that July 5, 1807. Note the convent of Santo Domingo in the background, then with a single tower.

There was a fierce combat in the area of ​​Corrientes and Reconquista, where Craufurd’s brigade had a hard time. lieutenant colonel Denis Pack took Moreno street and another group did it through Belgrano. The silence that reigned in the streets caught their attention, although they perceived murmurs and movements inside the houses.

When they turned towards San Francisco and another column that was going through Moreno headed towards Peru, they received a terrible volley of rifle fire that drove them back. They were the Patricians who riddled them from the heights of the roofs and balconies. The British took refuge in the house of Rafaela de Vera y Mujica, future mother-in-law of Bernardino Rivadavia, in Belgrano and Peru, where they resisted for three hours. The chronicles highlight the blood that ran down the walls of the front, by the British dead on the roof of that house.

Another English group, in Defense and Venezuela were surprised by the Creole fire and took refuge in the convent of Santo Domingo. They were surrounded by Cantabrian volunteers and by the residents of the neighborhood. from the house of Francisco Telechea, in Defensa and Moreno, they installed a cannon and fired at the only tower that the church had at the time. The English tried to break the siege several times but had to surrender.

The fire stopped. The English owned the Retiro barracks and the Residencia, although their best troops had already surrendered. British casualties amounted to 2,500, between dead and prisoners, including 105 officers including Craufurd; five colonels, two sons of milores and Denis Packwho in the invasion of 1806 had sworn never to take up arms again against Buenos Aires. “Using our mercy we do not take his life”wrote Beruti in their Curious Memories. On the defending side, 300 died.

In the second English invasion, there was a military deployment that, although it was very important, was rejected by the Creole defenses

The next day they started negotiations between Liniers y Whitelockewhile isolated shots were heard. Liniers offered him, by letter, to free all the prisoners -even those taken in the first invasion- if he desisted from further attacks on the city. And he warned him that due to the state of exasperation of the people he could not vouch for the safety of the prisoners. Whitelocke accepted.

The English undertook to abandon the Río de la Plata in 6 months; Liniers insisted that it be in two and that they hand over Montevideo. On the 7th at noon the armistice was signed. Church bells rang in unison, signaling that it was all over.

Each of the parties would return the prisoners. The next day, the invaders began to embark. On September 9, the last English ship departed from Montevideo.

“It is not surprising that a population such as that of Buenos Aires, encouraged by its first victory and by its hatred of the enemy, has been able to resist the coup. Each house was a fortress and each street a trench. A people like this must be invincible”published an English newspaper.

Cover of the trial against John Whitelocke. It was the end of his military career (Source Institute of Argentine Military History)

January 28, 1808 Whitelocke was court-martialed. He faced four charges: that he undertook ill-calculated actions that provoked the reaction of the residents of Buenos Aires; that he did not take adequate measures to defend himself from the population; that he did not make an effort to coordinate the actions of his forces in the street combat and that, dominating part of the city, including the arsenals, he agreed to surrender. On March 18, he was found guilty of all charges, except for the one referring to not attacking the population. He was dismissed, discharged and declared totally unfit and unworthy to hold any military employment of any kind in Her Majesty’s service.

Thousands of miles away everything was jubilation, parties and tributes. Even the city had the luxury of having its own count: it was Santiago de Liniers, the hero of the moment.

Unarmed Neighbors, the Fleeing Viceroy, and the Money-Worried English: Stories of the First English Invasion
The curious plan of a different Buenos Aires that the English projected when they invaded in 1806

The strategy that Maduro plays with the United States and China