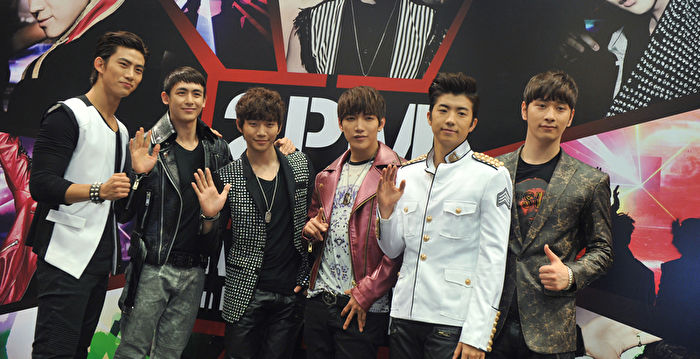 [The Epoch Times, June 28, 2021](Reported by The Epoch Times reporter Zeng Weixin) The popular Korean boy group 2PM today (28th) released its seventh official album “MUST”, which is about five years later as a complete group 2PM has returned to the music scene and released an album containing ten new songs this time, seven of which were created by 2PM members. They talked about the mental journey and behind-the-scenes fun of preparing the album in the Comeback Show tonight.

Since the release of the sixth official album “GENTLEMEN’S GAME” in September 2016, 2PM members have enlisted in the army or engaged in individual activities, so they suspended group activities in 2017. 2PM had agreed to fans at the “6Nights” concert held in June 2017 that they would return to fans, soJoon-hoAfter retiring from the army on March 20 this year and all members have ended their military service, fans are looking forward to the new work of 2PM members.

In the “2PM COMEBACK SHOW’MUST'” broadcast tonight, a program session was arranged to guess what each member is worth celebrating. In the final question and answer “Congratulations to 2PM after 1479 days 〇〇”,Taek YeonIt said that 1479 days refers to the blank period of 2PM’s activities, and the members replied together “Congratulations to 2PM for complying with the agreement to return to HOTTEST (official fan name) after a lapse of 1479 days.”

Joon-hoSaid: “Thank you very much for HOTTEST who trusts and waits for us. Our members are also working very hard to comply with this agreement. We will continue to work hard in the future.”

In this “MUST” album, “OK or NOT”, “On My Way”, “Hold You” and “My House (Acoustic Ver.)” are all composed by Jun. K.I wrote the lyrics and music for the title song “Make it (해야해)”Yurong, Also created “The Cafe”,Taek YeonAlso participated in the creation of the lyrics and music of “Champagne”.

When talking about “Hold You (놓지않을게／Won’t Let go of Your Hand)” composed by Jun. K (金敏俊), Jun. K said that this song was created by him only thinking about 2PM members and HOTTEST He wanted to express his “really very grateful” to fans through this song. The six members also performed this song in the Comeback Show. (Click to see）

Regarding returning to the fans after five years, Jun. K said that he was surprised that he had not stood in front of the public for five years, so he felt that he should do his best to bring it to the fans who have been waiting and trusting them for so long. Good show.He also talked about Thai members who don’t need to be soldiersNikon(Nichkhun), together with the fans, experienced the process of waiting for the 2PM members to return to the team.

NikonHe said that during this period, he had both Solo activities and sang many 2PM songs, but it was really hard to do it alone and sing songs that should be sung by six people, so he (returning for everyone) Very happy.

As the main producer of this new workYurongFrankly, he feels a lot of pressure on how to create a song better than “My House (우리집/我家)”, which has risen against the trend on the charts, and feels a psychological burden to respond to everyone’s expectations, but the process In the middle, Taek Yeon still composes songs even while filming, and Jun. K continues to compose,ChanshengParticipating with other people, so this album is not only he is working hard, but the work of all six members working hard.

Junhao said, “You Rong has surpassed Brother Jin Yong (JYP) this time.” This made You Rong couldn’t help but laugh, and at the same time he was very flustered. Junho went on to explain that Woo Rong was really working hard to prepare this album and the title song “Make it (해야해)” composed by him. He has mastered even small parts very carefully. In order to make a good work, You Rong spent a lot of energy.

Not only that, Junhao also revealed that You Rong stayed in the company for several months to eat and sleep, and the car was parked in the parking lot without moving. He was really desperately working on this album. Jun. K also broke the news. Even Ni Kun said to him when he was in the beauty salon, “I think You Rong has become like Brother Jin Yong”, which made the members couldn’t help laughing.

The members also admitted that this work was re-recorded at the request of Yourong, and the members also cooperated with the feeling that Yourong wanted to present. In response, You Rong responded that he was a little worried about how members who have already debuted for the 13th year and have their own characteristics will express this work, but he believes that there must be changes and innovations.ChanshengPraise You Rong for doing well, thank him very much. Jun. K said that this album uses the unique characteristics of 2PM members.

2PM also brought a performance of the title song “Make it (해야해)” at the end of the comeback show. In the end, Junhao said that they will work hard to carry out this new album activity; Ni Kun talked about that everyone should be healthy, 2PM and HOTTEST should go on together; Jun. K hopes to convey more love to everyone, as soon as possible Meet with everyone; Taek Yeon expressed his hope that 2PM’s song this time can be inadvertently left in everyone’s hearts, and he also hopes to show a diverse attitude for fans through many activities.