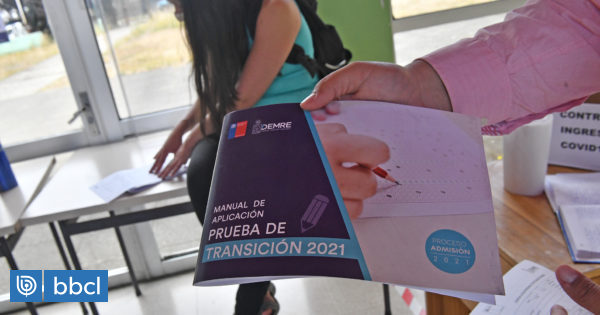 6 thousand people will take the Transition Test in the Los Ríos region and the different security measures for the days of the contest are already evaluated.

With the presence of the Carabineros, the different surrender premises of the test to apply for Higher Education presented information alluding to the mandatory use of masks such as alcohol gel disposal.

Also, glued to the ground, separating strips were installed to respect the physical distance both at the entrance and inside the enclosures.

The seremi of Transport and Telecommunications, Marcela Villenas, affirmed that as a portfolio they seek to provide greater security to those who mobilize on surrender days, which are in two batches: January 4 and 5, and on January 7 and 8, in order to avoid crowds.

After the recognition of rooms, an instance that was marked by a very low turnout, Elena acknowledged that she is nervous and wants to study a career linked to Health, stating that she agrees with the security measures.

From 06:30 hours the urban lines of collective taxi with 70% operation, corresponding to about 600 vehicles, reported the seremi de Transportes, as well as the operations of the Expreso a la Costa line in Valdivia, with buses leaving every half hour from its terminal.

The rest of the urban bus taxi services will have mostly 4 machines per hour.

For its part, rural transport estimates its operability at 50%, with 305 machines and frequencies depending on each service and its demand.

As for the services subsidized by the Ministry of Transport and Telecommunications for Isolated Zones of the region, they will operate in their entirety with 60 of them in the province of Valdivia and 16 in El Ranco, the government entity reported.

See Also:  Billionaires: wealth of the super rich is shrinking