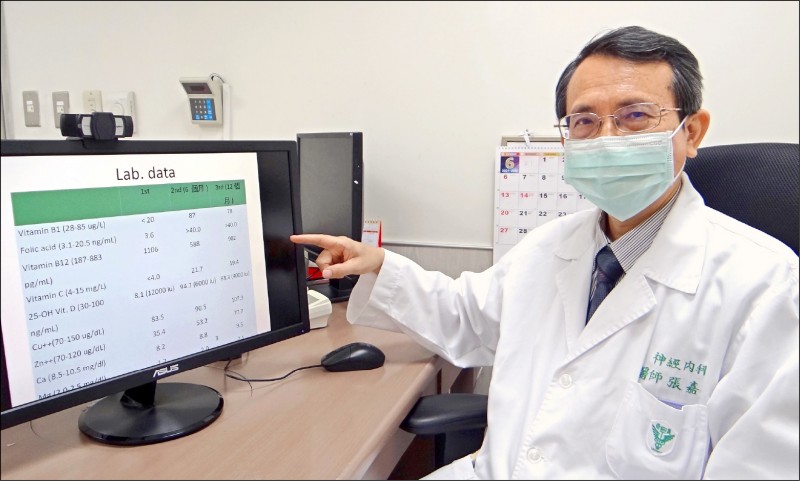 A 95-year-old veteran underwent lumbar disc surgery 20 years ago. After that, he suffered from lower back pain, foot pain, lameness and lower extremity edema for the past six months, and the pain recently caused him to be in a wheelchair. It was found that he had bleeding spots and black green in the capillaries of the skin and mucous membranes. It was a vitamin C deficiency. It showed that his daily intake of fruits and vegetables was insufficient, and his vitamin B1, C, D and mineral zinc and magnesium were insufficient. He was given intravenous nutritional supplements (1 a week) Second, lasting 3 weeks); after that, I continued to supplement oral nutrients for 3 months, the pain gradually improved, and now I don’t need crutches to walk.

After the course of treatment, the patient’s nutrients returned to normal or even higher, and the previously abnormal nerve conduction function was also significantly improved.

No crutches needed to walk after supplementing nutrients

Jiayou Zhang, the chief physician of the Department of Neurology of Chimei Hospital, pointed out that from the perspective of nutritional medicine, the key to good health is to keep the cells in a normal metabolic state. In addition to enough rest and exercise, it is necessary to give the cells the basic nutrients needed for metabolism. In the past, the nutritional problem was mainly insufficient calories; but now the problem lies in uneven or poor nutrition.

According to the survey of the national nutrition and health status from 2013 to 2016, the most severely deficient vitamins in Chinese dietary intake are fat-soluble vitamin D and vitamin E; calcium deficiency is the most serious in mineral intake, followed by magnesium, zinc and iron. , Sodium intake is too high.