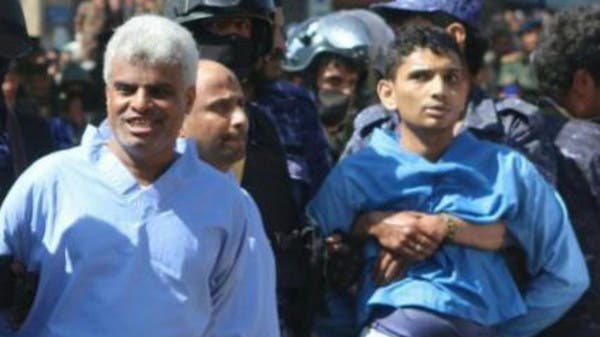 His picture in the blue dress collapsed while watching His eight companions, breathing their last, under the bullets of the Houthi militia in Sanaa, has spread like wildfire among Yemenis.

The Yemeni child Abdulaziz Al-Aswad came forward. You did not carry him while he was on the scene of execution, defenseless in the face of a group of gunmen holding their machine guns to carry out the death sentence against 9 people from Hodeidah.

The Houthis had arrested Abdulaziz 4 years ago while he was still a minor child, and accused him of being involved in the killing of Al-Samad, to be executed today, Saturday, without mercy.

It is noteworthy that the Houthi militia executed 9 people in Sanaa, after accusing them of involvement in the killing of the head of its political council.

Video clips showed Houthi gunmen emptying bullets into the heads of the detainees, while they were lying on the ground, handcuffed.

This came, hours after the Yemeni Minister of Information, Muammar Al-Eryani, warned of a crime that the Iranian-backed militias would commit by executing these detainees, especially since they included a child, under the age of 18.

It is noteworthy that Al-Samad was killed in April 2018, in an air strike in Hodeidah, western Yemen. The leader, who was killed along with six others, was among the most prominent officials killed by the militias since the beginning of their coup against legitimacy in mid-2014.