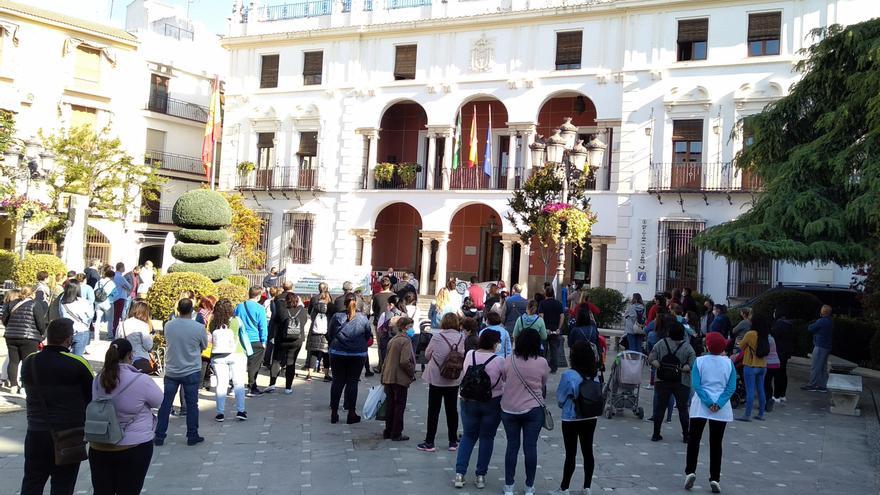 The fathers and mothers, concentrated in front of the gates of the City Hall.
R.C.C.

More than a hundred people have met early this Tuesday in the Plaza de la Constitución de Priego de Córdoba in the concentration in defense of public education and a drop in the ratio, convened by the Ampas La Luciérnaga, from CEIP Camacho Melendo, and Puerta Granada, of the CEIP Niceto Alcalá-Zamora.

The representatives of both groups were in charge of read out two manifestos in which they exposed the situation faced by their respective centers, showing their concern, outrage and disagreement with Education’s initial decision to remove a line of Early Childhood education in each of these schools, to which you have to join the one that already It was held last year at CEIP Cristóbal Luque Onieva.

Specifically, in the CEIP Niceto Alcalá-Zamora, the Board raises the creation of mixed units for the students of Infant (4 years) of the next course, remaining socially, sentimentally and educationally dismembered a part of said student body in the 3-year unit and the other in the 5-year unit.

In addition, they would be restricting the right to free choice of center to 5 families, as their preferences were not admitted.

Regarding the CEIP Camacho Melendo, in the manifesto that was read out, it was indicated that 35 requests to take the next course, excluding 10 requests for Education, thus leaving a class with 25 students of which 2 have diagnostic problems and need more support for their development.

Given these arguments, both AMPAS request a response to their demands so that no family is left out of the center they have freely chosen, announcing that not be heard your demands, their claims will continue, “at the door of the Córdoba delegation, at the gates of San Telmo or in the same Palace of the Congress of Madrid ”.

Once the reading of the manifestos was finished, the representatives of both AMPAS proceeded to deliver the content of the same to the mayor of Pricing, María Luisa Ceballos.

Along with Ceballos, several members of the Prgamosnse Corporation took part in the rally, as well as the mayor of the neighboring town of Carcabuey, Juan Miguel Sánchez.