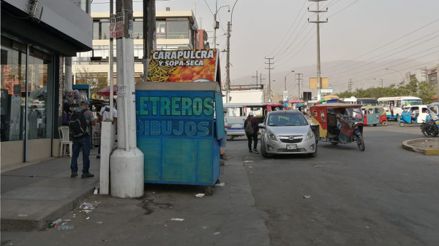 A man was shot to death by two hitmen when he was serving his food business at bus stop 5 on Wiese Avenue in the district of San Juan de Lurigancho.

The victim was identified as Luis Fernando de la Cruz Gómez, 40, who just a week ago had set up a carapulcra business in that place.

Witnesses indicated that De la Cruz was working when a motorcycle with Two men on board approached that point and one of them shot him.

He had just started his business

In statements to RPP News, another merchant in the area assured that the attack happened within seconds. He added that De la Cruz had no problems with anyone.

“I have heard two shots, I left I was already thoroughbred, I don’t know where they came from with the bike. Eight days he was working with that business. He was just there, he was good people, he talked, he made want his food, he distributed and everything, ”he said.

After the attack, the hitmen quickly fled the scene. Local merchants said they had never seen them.

Up to that point, personnel from the National Police arrived to start the investigations of the case, while the merchant’s body was transferred to the Central Morgue in Lima.