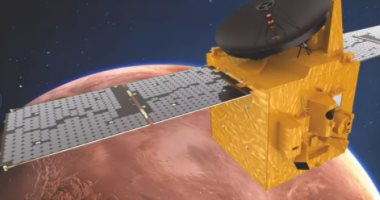 The Russian-European mission “ExoMars – TGO” received the first accurate information on the isotopic composition of water vapor inبخار Atmosphere of MarsThanks to this, it will be possible to know the date of evaporation of Martian water to The spaceThe study was published in the scientific journal Nature Astronomy.

And according to what the “RT” website stated, in an article published by the magazine: “Our information indicates that in most cases, the molecules of ordinary and heavy water decompose in the atmosphere of Mars and evaporate into space at the time when the planet approaches the sun to the closest possible distance, and this does not happen. When Mars is at its farthest from the Sun.

Recent studies have shown that ancient rivers, lakes and oceans of fresh water were present in the distant past on the surface of Mars, with the same amount of water, as in the Arctic Ocean of the Earth, and scientists have not yet been able to know where this water disappeared and when it appeared on the surface. Mars surface.

This can be known after determining a ratio between deuterium and hydrogen in the water molecules in the Martian atmosphere, and that ratio shows how much water Mars has lost since its inception.

It is worth noting that deuterium escapes slowly during the splitting of water molecules from the planet’s atmosphere, which leads to an increase in its share as the planet’s oceans evaporate into space, scientists do not rule out that other factors may affect the rotation of deuterium, and that they can greatly distort assessments of primary water reserves. for Mars.

Based on the aforementioned principle, a team of planetary scientists under the direction of Juan Alday from Oxford University observed during one Martian year how the proportion of ordinary and heavy water vapors changed in different layers of the planet’s atmosphere. Based on this information and computer models of the Martian climate, astronomers determined How the shares of deuterium and hydrogen in the atmosphere fluctuated in different seasons, and they also discovered when water molecules entered those regions of the atmosphere from where they could reach space.

Their information indicated that the proportion of deuterium in water molecules in the lower layers of the Martian atmosphere was about 4.9 times higher than in the Earth’s atmosphere. This confirms that Mars has lost huge amounts of moisture throughout its existence.

In addition, scientists discovered that the rate of disappearance of water molecules from the atmosphere of Mars depends mainly on the position of the planet in orbit, and when the planet was close to the sun, the rate reached its maximum value, and then began to decrease to almost zero at other times of the year.

The researchers hope that additional observations of the behavior of water vapor using the instruments of the ExoMars mission will help us learn new details of its escape from the Martian atmosphere, which in turn will provide an opportunity to learn the appearance of the Red Planet in the distant past.