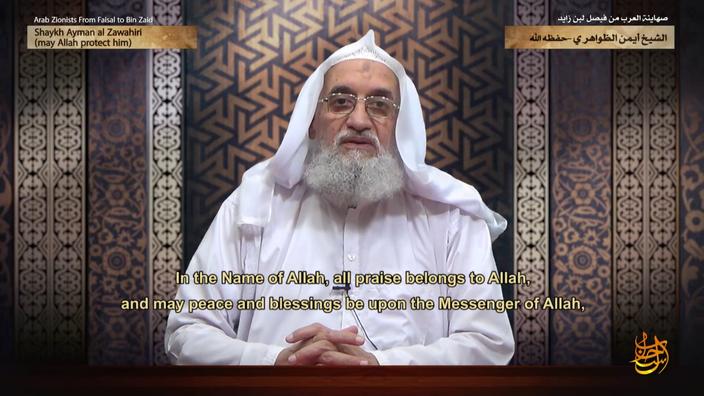 The date this footage was shot has not yet been identified. At the end of 2020, rumors reported the death of Osama Bin Laden’s successor.

His round face, recognizable by his marked forehead, is unfamiliar like that of Osama bin Laden, slender. Ayman al-Zawahiri, who was the personal doctor of the co-founder of al-Qaeda and one of his main lieutenants, however succeeded him in 2011 at the head of the jihadist organization after his elimination by US special forces. For ten years, the leader of al-Qaeda, born in Cairo in 1951, has been hiding – or hiding – to escape the fate of his predecessor. And one could think that he had succeeded since, from November to December 2020, supported rumors reported his natural death, as a result of an illness.

Read also“The United States in shock”: September 11 seen by the correspondent of Figaro in the aftermath of the attacks

For the 20th anniversary of the September 11, 2001 attacks, the figure of Ayman al-Zawahiri reappeared in a one-hour video released this Saturday by al-Qaeda and analyzed by the “SITE Intelligence Group”, an American NGO that studies jihadist digital propaganda. It appeared under the title “Jerusalem will never be Judaized», A formula he had already used in 2018 after the transfer of the American embassy in Israel from Tel Aviv to Jerusalem, decided by Donald Trump. “It is vital for us to target America“, Also declares the successor of Osama bin Laden.

But there is no indication that this footage has been shot in recent days, weeks or even months, because the jihadist leader makes no reference, for example, to the recent takeover of the Taliban in Afghanistan, who entered Kabul on the 15th. August. He does mention the American military withdrawal, but it has actually been recorded since the agreement reached in Doha in Qatar between the Taliban and the Americans in February 2020.

To see also – “Let’s be serious!”: Joe Biden defends the withdrawal from Afghanistan on the sidelines of the anniversary of September 11

However, on August 13, 2015, the leader of al-Qaeda had classically pledged allegiance to the leader of the Taliban, Haibatullah Akhundzada, whom he recognized as “Commander of the Believers», Which Osama bin Laden had also done with regard to Mullah Omar. The jihadist group recognizes the authority of “the Islamic Emirate of AfghanistanInstituted by the Taliban when they first seized power in 1996. In this regard, it is therefore surprising that it does not mention the latest events in Kabul.

In contrast, Ayman al-Zawahiri welcomes an attack by al-Qaeda fighters in Syria in Tel Saman in Raqqa province against a Russian military base. However, this took place in January 2021. The septuagenarian would therefore have at least been alive at that time, several weeks after the rumors of his death.

Also on September 11, 2021, al-Qaeda also announced the publication of a book by Ayman al-Zawahiri whose preface is dated April 2021. Comprising a tome of 852 pages, the book covers “political corruption and its impact on the history of Muslims».

This video and this book therefore cannot confirm that the leader of Al-Qaeda is still alive. “He could be dead, but if he was, it would have been at some point in January 2021 or after“, Rita Katz, director of”SITE Intelligence Group“. On CBS NewsMichael Morrell, former deputy director and acting director of the CIA, for his part said that Ayman al-Zawahiri could still be in hiding in Afghanistan. “The Taliban still harbor terrorism todaySaid the former Langley executive.

To see also – Attacks of September 11: “The target was the White House or the Capitol”, explains Laure Mandeville