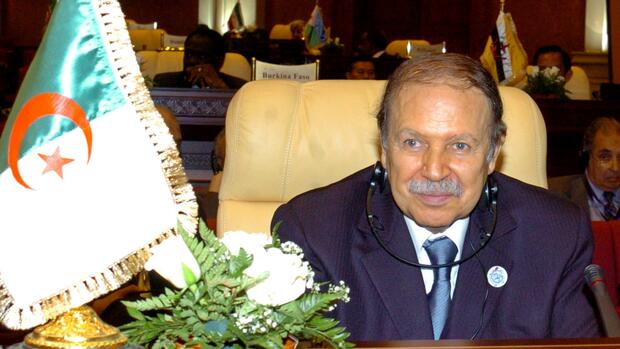 Algiers Algeria’s former head of state Abdelaziz Bouteflika has died after a serious illness at the age of 84. The Algerian state television reported on Saturday night. The mass protests against the long-time president had plunged the largest African country into a deep political crisis in 2019. Previously, Bouteflika had ruled the country for four consecutive terms since 1999.

Bouteflika was elected head of state in 1999 and initially survived the protests in the Arab world in 2011. In the West, he was seen as a reliable partner in the fight against terror, in Algeria itself he was supposed to reconcile the country after a bloody decade of civil war – which he shared with him Help from the military and political networks also initially succeeded.

But more and more resistance against Bouteflika became loud. In the last few years of his tenure, the president, who was in a wheelchair after a stroke, rarely appeared in public. Even the German Chancellor Angela Merkel had to cancel a visit at the last second in 2017 because Bouteflika’s state of health did not allow it.

When Bouteflika nevertheless announced that she would run for a fifth term in spring 2019, anger erupted in Algeria. Mass protests with millions of participants were the result. The demonstrators demanded his departure from the government. The military eventually withdrew his support and Bouteflika resigned a few days before the end of his fourth term.

However, the protests in Algeria continued. In the successor Abdelmadjid Tebboune at the head of the state and the government, the demonstrators see the continuation of the old power elite Bouteflikas. However, his resignation left room for new power struggles: the younger brother and advisor to the president, Said Bouteflika, who was seen by many observers as a potential successor, was arrested, as were many business leaders of Algerian companies. The economic situation did not initially improve even after Bouteflikas had left.

In the opinion of political observers, Bouteflica’s actions were determined by three major guidelines: ending the civil war, ending Algeria’s international isolation and restricting the power of the military. Of these self-imposed tasks, he was able to achieve successes at least in the first two.

However, he neglected urgently needed economic reforms, and neither did Bouteflika allow democratic change – which affected neighboring countries from 2011 in the wake of the Arab Spring. Bouteflika spent his last time as he had ruled in recent years: as a “phantom”.

There were also repeated mass protests against the government of President Tebboune, who was elected as Bouteflika’s successor in December 2019. Thousands of people called for real political change and an end to corruption and mismanagement. Today, Algeria, where there was a bitter civil war in the 1990s, is generally considered to be relatively stable.