Frankfurt It is a decision that has high relevance for millions of Germans. Every year in December, the majority of German life insurers determine the interest rate on which the total of around 84 million life insurance companies in Germany can count. Now, the German market leader Allianz has set a clear sign: The Munich Dax 30 Group has lowered the current interest rate by 0.3 percentage points. It now stands at 2.5 percent for classic contracts, and 2.6 percent for the "perspective" concept.

"From what happened in the summer in the interest market, the alliance can not decouple," said Volker Priebe, board member for private customers and products at Allianz Leben, this step. "On average, the current interest on new contracts in the coming year in classic private pension insurance should be around 2.30 percent," says Lars Heermann of the rating agency Assekurata. In the current year, it was still 2.46 percent according to his statements. This is a long-term trend down. In 2018 it was still 2.61 percent. In the two previous years, the industry average fell by 0.3 percentage points.

The classic contracts offer customers a guaranteed lifetime minimum interest rate, which for new contracts has been 0.9 percent for years. Added to this is the non-guaranteed surplus share, which will only reach 1.6 percent in the future. With the concept "perspective" there is no guaranteed minimum return. Because the guarantee also causes costs, "perspective" is slightly higher in the current interest rate.

As a rule, the customer, as the third element, if he keeps his contract until the end, still gets a final share with a participation in the valuation reserves. All three components together make up the total return. According to current calculations, this would amount to 3.1 percent for the classic and 3.4 percent for the new policies without guarantee. Customers receive the interest on their savings accounts, which accumulate from their contributions minus the costs.

The classic contracts still account for most of the inventory. Life insurance is still the Germans' favorite investment. Furthermore, the number of life insurance policies that have been concluded exceeds that of the inhabitants of the country, even though the trend has been declining for years. 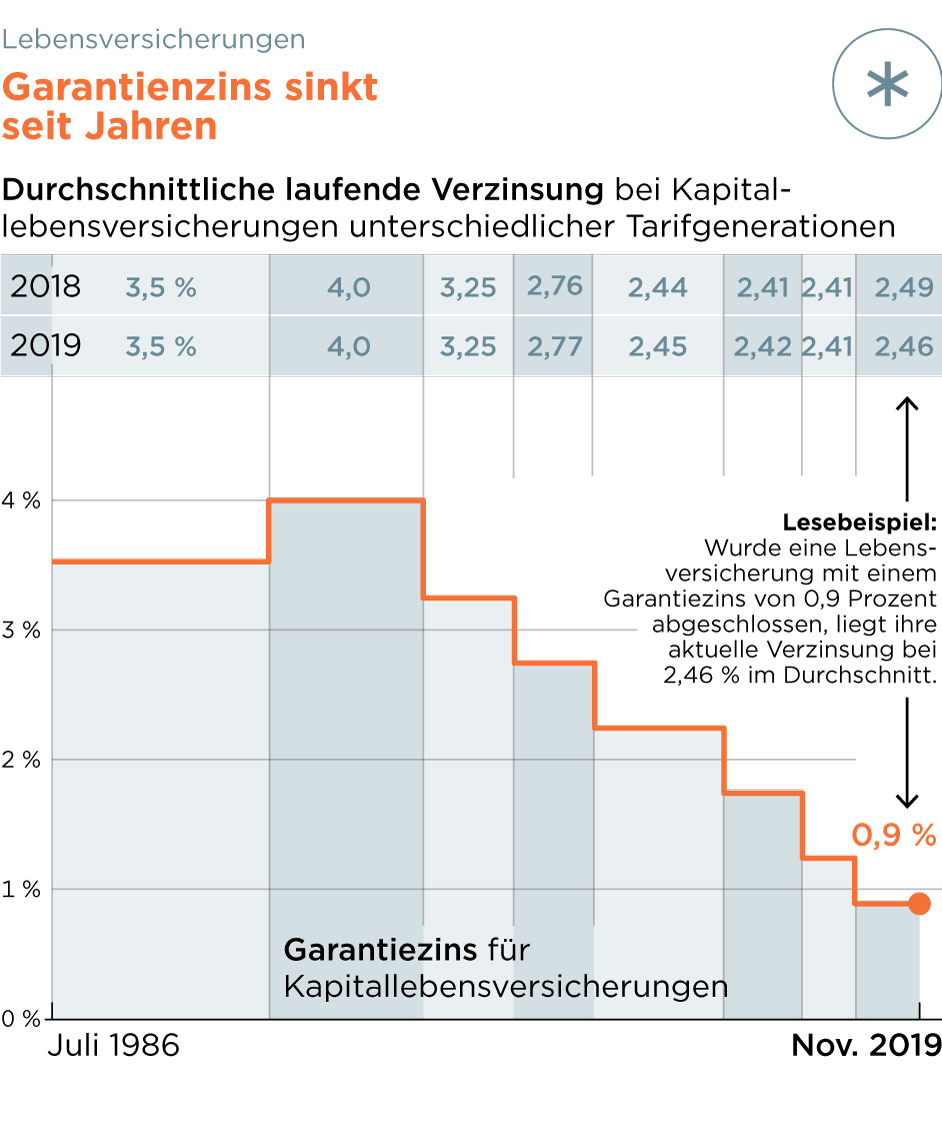 A return to earlier levels is not expected in the industry given the persistent low interest rate policies of the central banks. Even with rising bonuses the customers should not expect for the time being, according to the rating agency Assekurata.

Only a few names from the industry have yet published their plans for the coming year. At the beginning of November, Axa Life Insurance announced that its customers could continue to expect a stable profit participation despite the continuing negative interest rates. As in the past three years, the current interest rate is 2.9 percent, the total interest remains at 3.4 percent including the final profit and the participation in the valuation reserves. DBV Deutsche Beamten Lebensversicherung, which belongs to Axa, is also moving at this interest level.

Already in the middle of October, the small ideal life insurance expressed itself. Ideally, current interest rates hold steady at 3.3 percent and total interest rates at 4.0 percent. Berlin is likely to maintain its top position of the previous year this year.

Ideal Chief Financial Officer Karlheinz Fritscher cites one of the main reasons for this being "the anti-cyclical investment policy that has been taking the company for 15 years". The life insurer has an exceptionally high share of real estate, especially in Berlin. Today, the proportion of the portfolio is 24 percent. Ideal Insurance benefits from the fact that it invested in real estate at an early stage and since then, the valuations have risen sharply.

Alte Leipziger Lebensversicherung is lowering its current annuity interest rates to 2.25 percent in the coming year, down from 2.50 percent in 2019. Its total return will be adjusted from 2.9 to 2.5 percent. Thus, the insurer from the Hessian Oberursel is likely to move in the vicinity of the industry average.

At present, it is an aggravating factor for insurers that the additional payments for the so-called interest rate reserve are rising again. For the current year Assekurata now expects nine billion euros, the insurers have to pay in the pot. Originally only six to seven billion euros were expected. In order to secure the high level of commitments for legacy contracts in the low interest rate environment, since 2011 life insurers have had to set up a capital buffer whose payment mode was alleviated for insurers last year. However, the interest rate hurdle of the central banks is now eroding this effect. Because instead of the expected turn to higher key interest rates, from which the industry went out a year ago, they remain at a record low. 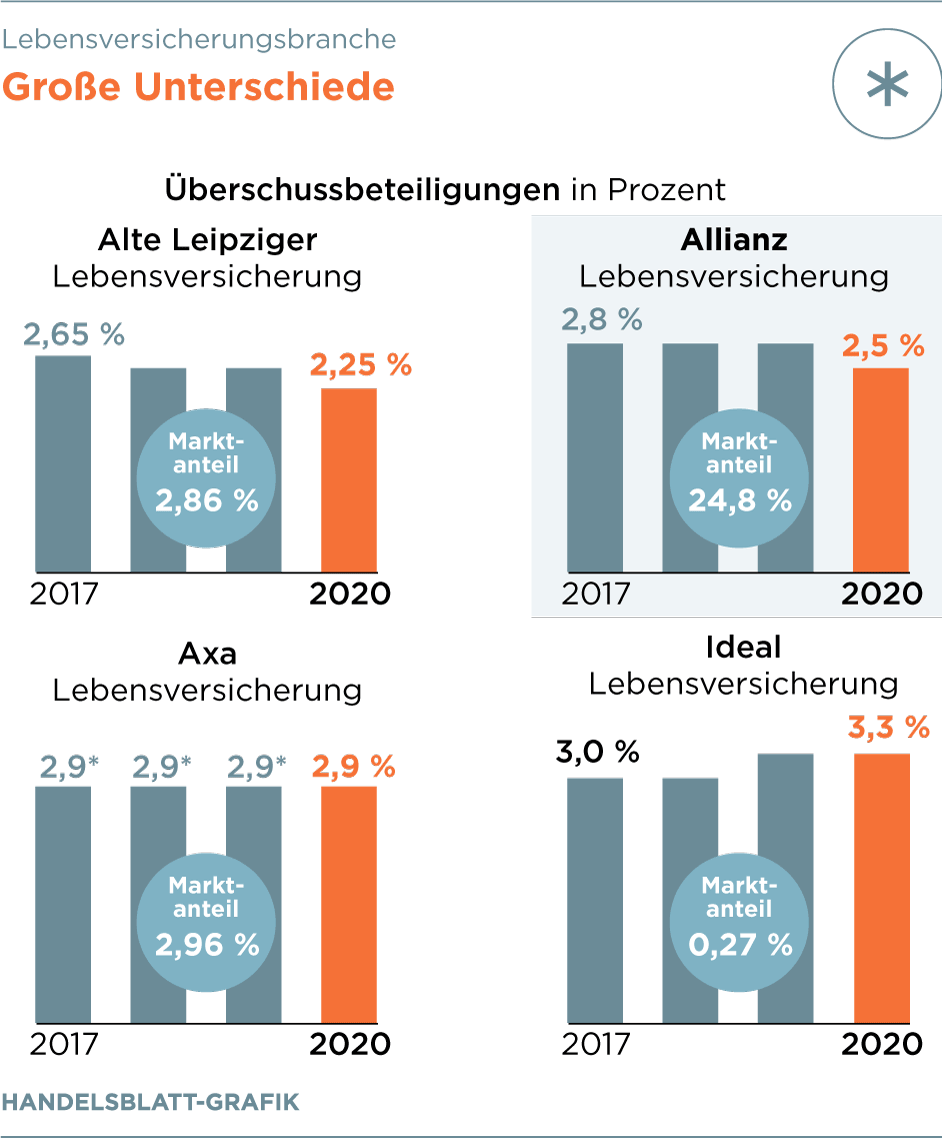 The whole industry groans under the low interest rate policy of the European Central Bank, because traditionally, the bulk of client money is invested in secure assets such as government bonds, which hardly give anything back. The further easing of monetary policy, to which the European Central Bank and the US Federal Reserve have now swung back, is therefore putting insurers in the limelight.

Their interest gains are shrinking – it is becoming increasingly difficult for companies to collect the required return. "If things continue in the ECB, for the savers comes the worst," warned in the summer of the CEO of Nuremberg insurance, Armin Zitzmann.

At the same time, life insurers have long since changed their strategy in new business. Here, the majority of providers now rely on policies without guaranteed interest. At Allianz, the proportion of German private customers is now over 90 percent. For these products, there is no guaranteed interest, instead, the customer only gets the assurance that he gets back his paid contributions in any case. But these policies give a slightly higher return than those with a guarantee.

However, many old contracts with guaranteed interest rates of up to four percent are now a major burden for the industry. Many German life insurers have completely discontinued new business with classic policies. Some others take it a step further and consider selling to third parties.

Thus, the financial supervision Bafin waved in April this year, a sale of Generali life, including four million contracts to the developer Viridium by no great din – the largest deal of its kind in Germany so far. Giovanni Liverani, Germany boss of Generali, make no secret that he is very happy about it. "Classic policies with a guaranteed interest rate of three percent are out of date in a world of negative interest rates," he said a few days ago. "Sooner or later they will be toxic to the entire industry."

More: Life insurance: which policies are worthwhile – and which are not

Amnesty: More than 200 killed in riots in Iran