Some information has been leaked about AMD’s Ryzen 5000 processors for desktops. The chips are said to be called Warhol, and are based on the Zen 3 architecture on a 7nm process. The Ryzen 6000 series, in turn, would be called Raphael and include Zen 4 cores at 5nm.

In a tweet that has since been deleted, Twitter user MebiuW shares a slide that shows that AMD’s upcoming Ryzen 4000 desktop CPUs, called Vermeer, will be succeeded by ‘Warhol’, VideoCardz writes. MebiuW has leaked accurate information more often in the past.

The leaked slide. Image via MebiuW and Videocardz

According to the Twitter user, the Warhol chips are said to be based on AMD’s Zen 3 architecture on a 7nm process. AMD’s upcoming Ryzen 4000 desktop chips are also being produced at 7nm, MebiuW claims based on anonymous sources. Ryzen 6000, in turn, would be called Raphael, based on Zen 4 cores and a 5nm process. Further details about these chips are not yet known.

MebiuW’s information contradicts a recent report by Digitimes. That Taiwanese newspaper stated earlier this week that AMDs plan to produce Ryzen 4000 Zen 3-based desktop processors at 5nm. The company would deviate from its own roadmap, which speaks of a Zen 3 architecture at 7nm. Zen 3 is planned for the end of 2020 according to the AMD roadmap. Zen 4 based on 5nm would follow in 2022. 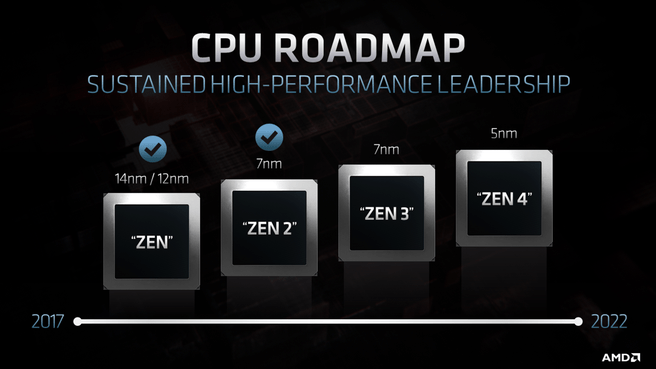