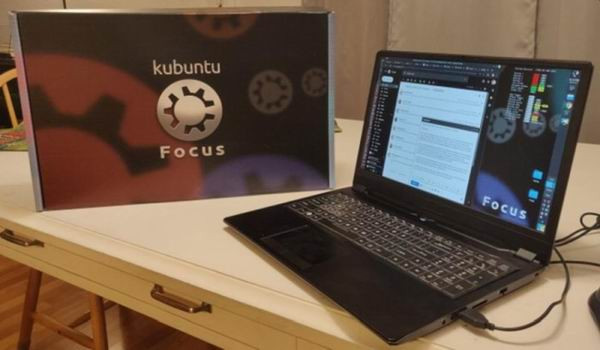 The Kubuntu Focus Linux laptop, announced in December 2019, went on sale at a lower price than what was announced. The laptop is designed for professionals, runs on Linux, but at the same time has a number of features specific to gaming mobile PCs.

Kubuntu Focus combines a modern hardware platform, including the ninth generation Core i7 processor and Nvidia’s almost flagship video cards, and Kubuntu distribution with KDE interface. The authors position the laptop as a mobile PC for developers and advanced users, however, it has at least one feature that is characteristic primarily for gaming models. The WASD buttons on the keyboard got their own design – these keys are most often used in video games, primarily in shooters.

In the basic configuration, the Kubuntu Focus costs $ 1800 (112.8 thousand rubles at the Central Bank rate as of January 28, 2020). During the announcement, which took place in mid-December 2019, it cost at least $ 2,400 (150.3 thousand rubles), and it is not yet known what affected the cost reduction. For comparison, the new Apple MacBook Pro 16, released in the fall of 2019 and having much similar content in the initial configuration, costs the same $ 2,400 in the USA, and in Russia they ask for 200 thousand rubles.

Kubuntu Focus is not inferior in performance to top gaming laptops

The developers do not disclose the price of the top-end configuration Kubuntu Focus.

Kubuntu Focus differs from most full-size laptops with a screen with a non-standard 16.1-inch diagonal. It supports Full HD resolution (1920×1080 pixels), based on the IPS matrix, it has a matte finish and its refresh rate is 144 Hz. This is another “gaming” function of the laptop – this frequency is most often required in dynamic video games.

The laptop is assembled on the Intel Core i7-9750H processor, released in the II quarter of 2019 and manufactured according to the norms of the 14-nanometer process technology. This is a mobile chip with six cores and 12 threads (Hyper Threading technology), a peak frequency of 4.5 GHz in Turbo Boost mode and 12 MB of cache. This processor may contain a CacheOut vulnerability discovered at the end of January 2020.

Kubuntu Focus was created for professional users and developers

The laptop video subsystem is a discrete Nvidia GeForce RTX 2060 graphics card. The chip has 6 GB of its own video memory of the latest GDDR6 standard and can optionally be replaced with an RTX 2080.

A lot of memory

Kubuntu Focus uses dual-channel SODIMM DDR4-2666 RAM. By default, its volume is 16 GB, but in the maximum configuration it is increased to 64 GB. The possibility of independent memory upgrade without loss of warranty, which in this case is valid for two years, is implemented.

The power subsystem is represented by the Samsung Evo Plus NVMe SSD-drive in the M.2 form factor with a capacity of 1 terabyte, developing a reading speed of 3500 and a record of 2700 MB / s.

In addition to the main SSD, you can install another one in the same design. Separately, there is a slot for a 2.5-inch SSD or hard drive with a SATA interface. The manufacturer offers an option in the form of two 2-terabyte Samsung Evo Plus and one Samsung Evo 860 for 4 TB.

Interfaces and other features

Kubuntu Focus is assembled in a plastic case with a metal frame and has a keyboard with customizable backlight and 3-mm stroke buttons. The laptop weighs 2 kg with a battery for 3.5 hours of battery life and a three-fan cooling system, and its thickness does not exceed 20 millimeters.

Inside the laptop, Bluetooth 5 and Wi-Fi 802.11ac modules are installed, while at the ends there is a gigabit Ethernet port, a multi-format card reader, an input for a wired headset and two full-sized USB 3.0 ports. Additionally, there are three USB 3.1 Gen.2 (one with DisplayPort 1.4 support), as well as one HDMI 2.0 with HDCP support and miniDisplayPort 1.4 with the ability to connect GSync-compatible gaming monitors. In total, up to three external monitors can be connected to the laptop.