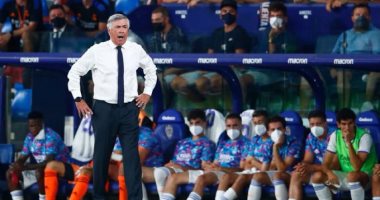 Press reports revealed that the Spanish club Real Madrid is preparing to achieve a distinguished start this season at the local and continental levels, under the leadership of Italian Carlo Ancelotti. The Spanish newspaper “Marca” reported that the coach continues his attempts to improve the defensive side of the team, especially after receiving 6 goals this season, despite the good start of the Meringue.

The newspaper confirmed that the injury factor was the main reason for hitting the stability of the back line of Real last season, since February and within six months of the competition, the Royal Club used 22 different defense lines in the last 29 games.

The newspaper stressed that this season, Real Madrid used 4 different defensive lines in the five matches.

The Spanish team, Real Madrid, will visit the Mestalla stadium tomorrow, in preparation for facing Valencia in the fifth round of the Spanish League.

Real Madrid won a big victory in the last round against its guest, Celta Vigo, 5-2, in the first appearance of the royal team at the “Santiago Bernabeu” stadium, since it was closed in March 2020, due to the comprehensive renovations on it.

Real Madrid leads the Spanish league table with 10 points, ahead of Valencia, who has the same number of points.