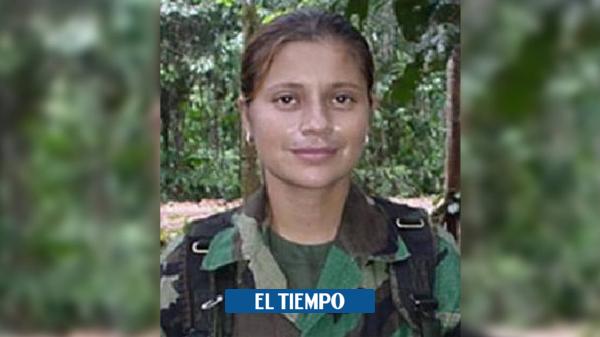 Rarely Astrid Conde he could take a step without looking back. However, every day I went out to walk through unfamiliar streets of a city, Bogota, which he could never call home.

He did not give his number to anyone, even if they were old friends he made during the time he was in the jungle, in the demobilized FARC guerrilla. Of most people I felt distrust, because the idea that someone was chasing her to hurt her always ran through her mind. To assassinate her.

(Can read: The murder of the man who laid down his arms after three wars)

She spoke with few and few speak of her now that she is gone. Death, from which he fled so much, finally reached her in March 2020 in the capital of the Republic, where he was advancing his reinstatement process after joining the peace process signed in 2016.

Conde, whom some also knew as ‘Nancy’, had already lived in Bogotá for five years and was working to leave that past that never let go of her and for which many they were looking for.

“I went to Macarena one day to visit my sister. The day I got there they arrested me, took me to a police station, locked me up and when I least thought, big guys arrived who said they were from the CIA and that they were going to take me out of the country, that they were going to give me a lot of money if I delivered to Kind”. That was what Astrid told shortly before her murder to one of her closest friends, the same one who always called her ‘Nancy Chiquita’.

‘Gentil Duarte’, whose real name is Miguel Botache Santillana, is one of the leaders of the dissidents and one of the most wanted men in the country. He was the first great leader of the Farc to betray the peace process —the path that was later followed by ‘Iván Márquez’, ‘Romaña’. ‘Santrich’ and ‘el Paisa’— and a red Interpol circular weighs on his head and a reward of up to 2,000 million pesos for information that allows his location and capture.

This is the last known photo of Miguel Botache, ‘Gentil Duarte’.

(We suggest: This is the hunt for ‘Gentil Duarte’, one of the most wanted in the country)

He was also a sentimental partner of Conde, and because of that connection many came to her in search of any clue that would allow them to find the dissident, who is pointed out in many of the murders of demobilized persons perpetrated in Meta and Caquetá. “They have a persecution of me, and what am I going to hand over to ‘Gentil’, if I don’t know anything about him. I have a broken relationship with him. We separated many years ago, ”she told her friend and former guerrilla partner, who asked not to reveal her name for security reasons.

From that relationship was born Jhon Jairo Botache Conde, a son that Astrid did not know about for at least a decade and whom she found again in Bogotá. It was his motivation to keep going, betting on peace.

Astrid said that for a long time she suffered because ‘Duarte’ did not allow her to know about her son. “It was like when he felt like it. She had a lot of problems with him because of that, because it restricted direct contact with her son,” says her friend.

He spent the first years of his life without his mother, raised by his paternal grandmother in Vichada and Guainía, and in 2011 press records it appears that he was recruited and later expelled from the Army when it was discovered who his parents were: the then commander of the front 7 of the Farc, one of the most violent and involved in the drug trafficking business; and a member of the PC3, the old political arm of the Farc. Astrid’s son spent nine months in the General Prospero Pinzón Infantry Battalion, in Puerto Inírida (Guainía).

They have a persecution of me, and what am I going to hand over to ‘Gentil’, if I don’t know anything about him

Meeting that son again became Astrid’s flag. Before the peace process, she was arrested when she left the forest to seek medical help for breast cancer. On charges of rebellion and obtaining a false public document, she was sent to the prison of the Good Shepherd in Bogotá: while in prison they performed a mastectomy and later reconstructed her breast. Due to chemotherapy, her brown hair fell out and her health was seriously affected, but she had a compelling reason to continue fighting: the reappearance of her son, who one day came to the penitentiary to visit her, along with his paternal grandmother.

From there they did not separate again. “While I was in jail he never left me, he always visited me. Every eight days I went. (Now) we have a very beautiful relationship, he is my friend, my partner, he is my everything, “Conde told her friend one day when they met and walked for several hours in Kennedy, the same town in Bogotá where she would later be assassinated. .

Jhon Jairo Botache visited his mother while she was in prison and after his release, in July 2015, their relationship became so strong that during the last years of Astrid’s life they lived together in an apartment in the southwest of the capital.

For him, I wanted to get ahead. For him, he was trying to survive in a city he described as’cruel‘for ex-combatants who advance their reintegration process: 755, according to the Association of People in the Process of Reincorporation of Bogotá. Short and thin, Astrid seemed fragile in a city that has a very different rhythm than she was used to. Taking a taxi, riding the Transmilenio or being in the middle of the many streets in Bogotá can be easy for many citizens, but it was not for her. And for many veterans, neither.

(We suggest: The challenges of disarmament, demobilization and reintegration of combatants)

Even Manuela Marín, one of the Association’s directors, assures that reincorporation in large cities is more complicated than in territories: “In cities, for example, it is different in terms of stigmatization and solidarity. The insecurity has caused many of the ex-combatants to come to the neighborhoods to search for their lives, keeping information about who they are ”. But many have to do it because there is a greater labor supply in the capitals than in the territories.

In cities, for example, it is different in terms of stigmatization and solidarity

Astrid’s friend agrees and recalls that, between laughter, she ventured to her and told her that she felt that she was being raised and lowered every time she used public transport. “You feel like you’re drowning because you’re not used to this life,” he would say.

Despite how difficult and lonely her days could be, there was an idea that apparently tied her to Bogota: rebuild your family fabric. His intention was to make up for lost time with his sisters, brothers, his mother, and of course, his son. Life had given them a second chance and she wanted to take it.

During the week, Astrid worked tending a health food store. In her spare time she studied and, according to what she told her friend, she planned to train to be able to get a job as an escort. And yes, in the long term his goal was to return to the field.

The March 5, 2020 What Astrid had foreseen for so long happened. In the morning, while he was walking with his German shepherd dog in a park near the apartment where he lived, a hit man shot him five times with a silencer pistol.

Although she was transferred to the Clínica de Occidente, the efforts of the doctors were in vain: she died at 40 years of age and was the first female ex-combatant killed in the country’s capital.

In fact, according to information from the databases of the Farc Verification Commission, the Investigation and Accusation Unit of the JEP and the United Nations, two men have also been assassinated in the capital – Jhon Mariano Ávila Matiz and Audias Cárdenas Romero -. Of the three, Astrid is the only woman on the list.

Her friend remembers that in their conversations they touched on the subject of the companions who had been murdered after the peace process. They both feared they were just another number on those heartbreaking lists. But he says that despite sadness, outrage and fear, Astrid always stood firm with peace. Returning to the mountains was never an option to consider.

(Can read: ‘Any figure greater than zero is high’: Emilio Archila)

According to the Investigation and Accusation Unit of the Special Jurisdiction for Peace (give), the presumed responsible for Conde’s murder are the FARC dissidents.

For this case there was a capture. That of Jhonatan Sneider Castelblanco Velasco, who, according to the authorities, had been paid in advance to shoot and assassinate her. They also charged him with the crimes – which he did not accept – of aggravated homicide, attempted murder and possession of firearms.

That day, according to the Prosecutor’s Office, a guard managed to react to prevent Castelblanco escape. The criminal tried to sneak into some sewage canals, but the police managed to capture him.

This newspaper recorded last year that the man had three ongoing legal proceedings for theft, illegal possession of weapons and bribery for giving or offering. In two of them he was convicted, but had been granted conditional release.

Relatives and loved ones said goodbye to Astrid Conde during her funeral in Bogotá.

The March 8, 2020On the day of Astrid’s funeral, her family and eight of her companions who were also part of the guerrillas gave her the last goodbye. Her son did not want anyone to see her inside the coffin, so they were accompanied in pain without seeing her face again. They were all smashed.

“Why do they kill the illusion of a boy of those? He never thought he would have to bury mom so soon. She was a mother who went out with the illusion of being by her son’s side, of sharing and making up for lost time, and finally he ended up taking her to the cemetery, ”says her friend and former partner in arms.

The AP news agency says that the vehicle that transported the box stopped at the entrance to the cemetery that Sunday. There they had left painted on the wall a message with red spray that said: “Only the dead know the end of the war.”

* Expect this Sunday, September 26, 2021, a multimedia special about the murder of ex-combatants of the Farc.