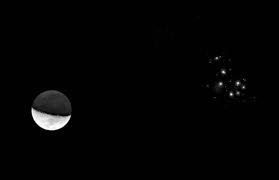 In the sky of the Arab world, after sunset today, Wednesday, the association of the growing humpback moon with the planet Saturn is observed in a phenomenon seen with the naked eye.

The Astronomical Society in Jeddah says: The humpback moon will appear near the planet Saturn in and will be near them to the left for the observer, Jupiter, and all of them will be regular in a celestial triangle.

Saturn is the second largest planet after Jupiter, its diameter is nine times larger than the diameter of the Earth, and like Jupiter, Saturn is made of gas mainly hydrogen and helium, and it is the sixth planet in terms of distance from the sun and it is the farthest planet in our solar system that can be easily seen with the naked eye as a golden point .

Saturn is known as the jewel of the solar system, the Lord of the Rings and the King of the Rings because of its wonderful ring system that can be seen through telescopes only. The main ring covers almost the distance between Earth and the Moon and is only one kilometer thick.

By observing the position of the moon at the same time every day, it will be noticed that its movement is towards the east with respect to the stars and planets in the zodiac circle, so tomorrow, Thursday, it will be noticed that the moon has moved towards the east, and will become between Saturn and Jupiter for the observer, which is its natural movement in its orbit around the Earth.