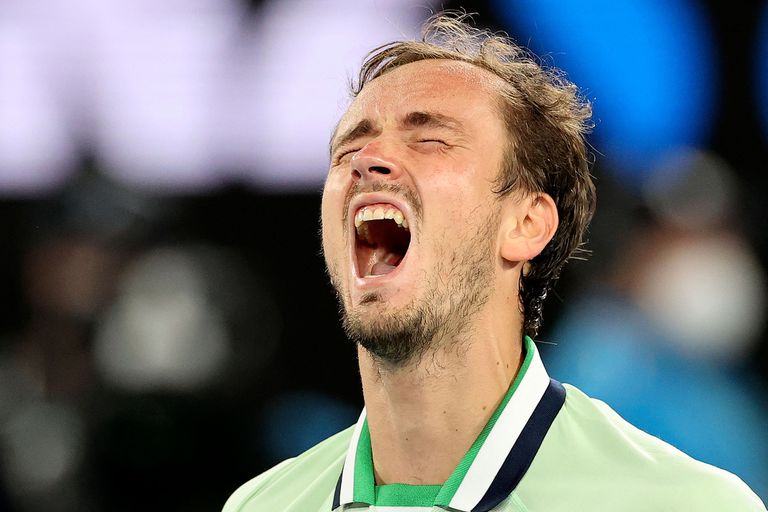 Daniil Medvedev, the second best racket in the world, It is usually an iceberg inside the court. However, in their epic match in the quarterfinals of the Australian Open against the Canadian Felix Auger-Aliassime (he came back from two sets and a match point to win 6-7 [4-7], 3-6, 7-6 [7-2], 7-5 and 6-4, in 4h42m) the Russian He showed a much more sanguine and emotional side. At the Rod Laver Arena, he insulted the camera director, celebrated points by shouting, introduced the figure of Novak Djokovic on the court causing boos and matched the reactions citing Rafael Nadal and Roger Federer.

After the match, on the very hard surface of the Aussie tournament, in the usual interview with the American Jim Courier (former world number 1, two-time champion in Australia), Medvedev said that he did not know how he had managed to turn the match around. Although he referred to Djokovic, deported from Australia before the tournament, after several chaotic days between Australian courts and pro and anti-vaccine messages against Covid-19.

“I don’t know if people will like it, but being two sets down I asked myself: what would Novak do in this situation?”said the Muscovite, rogue. And the reaction of the public was mixed: applause but also whistles were heard for the Serb, a nine-time champion in Melbourne, but rejected by a large part of the Australians for wanting to compete in that country without being vaccinated against the coronavirus.

Of course, the whistles immediately turned into applause when Medvedev said that he also thought about how they acted in those cases “Rafa or Roger”. He then added: “Novak is one of the greatest, along with Roger and Rafa, and I have a long way to go to get to his level. So I thought: if Felix wants to win it he has to sweat, I will fight until the last point. It was fun when they closed the roof, I realized that I had to be more aggressive and I started to play better. In the first set I was sweating a lot, my hands were slippery, I couldn’t hit well, I didn’t know what to do. The roof closure certainly helped me because I was sweating less.”

It was a grueling match, 4h42m, in which Medvedev showed all moods. There was an awkward moment for the umpire, with the score 2-1 in favor of Auger-Aliassime in the fourth set. Medvedev exploded against the camera operator for not liking what he was showing on the giant screens of the stadium. And he told the chair umpire, the Frenchman Damien Dumusois: “Can you ask the operator to stop being really stupid and put the huge shots of Felix’s face right before I come back? Can you be more stupid? Moron. You really don’t need a brain to do it, it’s amazing.”he spat. The umpire (very experienced on the circuit) listened to him and ended up complying with the request: he took his handy and reported what was happening.

Minutes and hours passed. With courage and lucidity, Medvedev managed to turn the match around to earn – for the second year in a row – a place in the top four at the Australian Open. Before leaving the Rod Laver Arena, he left a message for the Greek Stefanos Tsitsipas (4th), his next opponent. “Not tired” he wrote on camera, smiling Technically unorthodox, somewhat unpleasant for many, Medvedev goes all out building a character that, without a doubt, will continue to gain prominence on tour.

This fall: Guillaume Lemay-Thivierge back at the helm of “Masked singers”