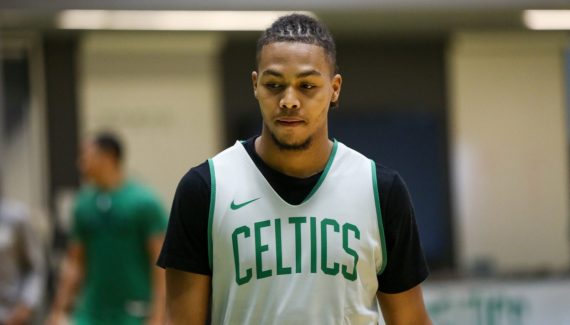 The only French player drafted in the NBA this year, in 45th position, Juhann Begarin will have to wait a little longer before officially starting his career in the United States, near Boston. The Celtics executives, who own the rights to the 19-year-old full-back, have effectively decided to leave him in Europe for another season.

And it is with Paris Basket, promoted to the elite of the French championship for the first time in its (very) young history, that Juhann Begarin will compete in the 2021/22 financial year. A logical decision for him, who says he is excited at the idea of ​​discovering the French first division (or Betclic Elite).

« This is the club I started with and helped me achieve my goals », He confides to us on the occasion of the Paris Basket Media Day. ” To me it was clear that if I didn’t stay [à Boston], I would continue with Paris Basket, because I was promoted with them. [La Betclic Elite], it’s a new challenge for me and a new game that I will have to adapt to, so there was no reason for me to change teams [en Europe]. »

An imperfect but encouraging Summer League

Preview this summer at the Summer League in Las Vegas, after asking permission from its neo-president Brad Stevens to participate, Juhann Begarin had turned to 6.2 points, 3.4 rebounds and 3.0 assists on average, in five games in the Nevada. All at 39% on shots and 22% at 3-points.

« I could and should have done better “, He judges, about his performances in the summer league. ” But it was not all bad. I think I showed a lot of good things and my qualities. »

So in a Boston team that was logically defeated by Sacramento in the final of the tournament, Juhann Begarin had alternated between good and bad, but failed to convince Celtic leaders to keep him in Massachusetts as early as this season. Certainly disappointed and frustrated that he will not be able to live his American dream in 2021/22, the Frenchman, however, prefers to remain positive.

« I take it as a new opportunity, because I will be able to progress more and be better prepared next year He admits. ” But I will have more opportunities at [Paris Basket] and, if I’m really better, maybe I can take more responsibility [à Boston]. »

Come back better in a year

Unsurprisingly, when he is clearly asked if the plan was to return as early as next year to the Celtics, where he considers himself ” honoré To have landed, Juhann Begarin responds unequivocally.

« Yes, that’s the goal. [Les dirigeants de Boston] will follow me throughout the season and watch my performance, tell me what to do. […] They sent me back to Europe for a year and I know I still have work to do to be better there. So I will do whatever it takes for next year. »

While waiting to find Boston and Massachusetts, for this ” new challenge “Within a” ideal franchise “In his eyes, and where he will rub shoulders” some great players Like Jayson Tatum or Jaylen Brown, Juhann Begarin has already been able to identify the aspects on which he must work, in order to be fully ready for the 2022/23 fiscal year.

« I have to keep improving on my shoot, my dribbling and just about every aspect of basketball “, Lists the one who admits to being inspired by players present in Europe, like his compatriot Nando De Colo (Fenerbahçe), but also Mike James (Monaco), whom he will be able to face from this year. ” I’m very young, I still have a lot to learn and I think this season in Betclic Elite will bring me a lot to this level. »

In Betclic Elite, Juhann Begarin will in any case have the opportunity to face some of the best European teams, such as ASVEL and Monaco, which will compete in the Euroleague. ” Impatient »To face them, the 45th choice of the last Draft is especially eager to achieve a great season with Paris Basket, which is simply targeting the Top 8 in the standings, and therefore the playoffs.

« I think we have a good group and that we can do good things this year », He announces to us. ” My goal will be to progress and bring as much as possible, without neglecting collective objectives. One does not go without the other. I wouldn’t be able to perform if the team isn’t, they will need me to perform as well. »

And to perform as well as possible, Juhann Begarin will be able to draw on what his short summer stint in the United States taught him. More particularly with regard to his vision of basketball in general.

« I know better the way Americans play “, Explains, finally, the one who lived his NBA Draft as a” deliverance », From New York. ” If I bring that to my game, in European basketball, it can give a good combination, which will allow me to play better and progress. If we look at the French championship, we see that there are a lot of foreigners, and in particular Americans, who dominate and it is not for nothing. »