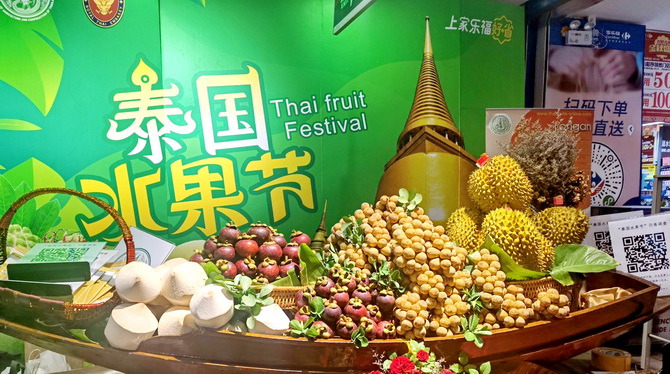 Ms. Pathumwadee Imthua, Minister Counselor (Agriculture) of Beijing, made her opening remarks, emphasizing that China is the main export market for Thai tropical fruits. It has been popular and the volume of exports to China has increased dramatically, despite the outbreak of COVID-19 in the past two years. However, the export volume in the first half of this year reached 1.18 million tons compared to the same period last year. with an increase of 24 percent. “Thai Fruit Festival” this time to push Longkong to Chinese consumers to know more than from durian, longan, mangosteen and coconut.

There are offline and online activities including:

2) Livestream activities via Meituan channel to introduce Thai food “Tom Yum Kung with Young Coconut”, Longkong and other fruits benefits of Thai fruit fruit selection method including the process of controlling Thai fruits before being exported to China, etc.

3) Online questionnaire preparation To study the consumption behavior and attitudes of Chinese consumers towards Thai fruits. with a total of 261 respondents.

As a result of the event, there has been a lot of interest from Chinese customers. In particular, longkong by the Beijing Government has suggested that it is a fruit that is delicious and beautiful from the inside with soft white flesh. Although the color and appearance are not beautiful and not beautiful, the consumers who attended the event were very interested in purchasing and inquired about the purchase channel. Because it tastes good, sweet, delicious, and has a novelty that has never been known before and is thought to be a longan. because they are similar If there is a way to control the quality from the garden There is a way to preserve and can extend the shelf life for a longer time, which will be a fruit that has the potential to expand in the Chinese market in the future.