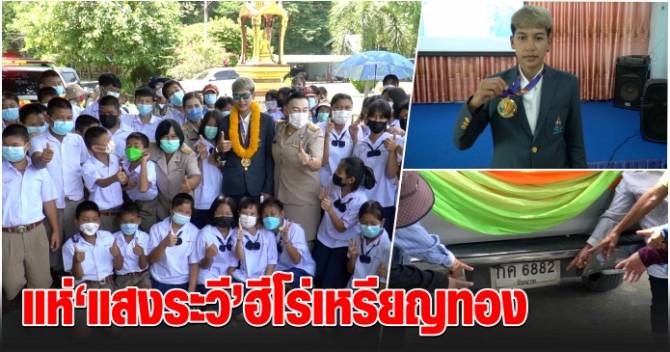 On May 31, 2022, reporters reported that From the case that Ms. Saengrawee Mee Kham or Nong Khanun, 25 years old, Thai national futsal athlete nicknamed “Wings Leap”, won the gold medal at the 31st SEA Games or “Hanoi Games” at Hanoi, Vietnam It was the first and only gold medal. of Chainat Province By Mrs. Puangthip Umpho, Prime Minister of Tha Chaun Subdistrict Administrative Organization organized a parade in honor to meet people and students in Tha Chuan Subdistrict Amidst the warm, fun atmosphere, there are singing and dancing. Along the route, more than 30 km long, both the provincial gold medal hero, the Prime Minister of the Sub-district Administration Organization, the teachers and the students danced happily. Non-stop dancing

Ms. Saengrawee Meekham revealed that she has been playing football since high school until playing futsal. Then join the Thai national team to compete I have been trying all my life because my father is farming. He wants to be successful and make his family proud. I want my father to be comfortable The contract with the Chainat brothers and the Thai people in the whole country will continue to develop footsteps Set your goals high and achieve them. Definitely bring another gold coin to the Thai brothers and sisters. As for any youngsters who are discouraged Or are doing what you like, want to be patient, try to reach your dream side, don’t be discouraged, and you will surely succeed.