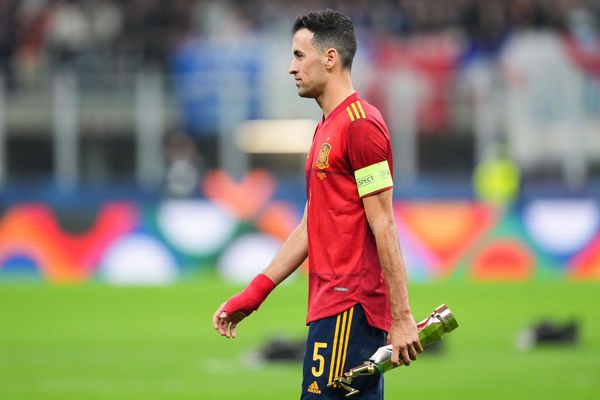 he best player in the Nations League Final 4, Sergio Busquets continues to shine with Spain. The midfielder has yet made a catastrophic start to the season with FC Barcelona, ​​whose coach Ronald Koeman will have to ask himself the right questions.

Sergio Busquets was voted best player in the Final 4.

Last week, FC Barcelona supporters had to pinch themselves in front of Spain’s matches in the Nations League.

And yet, it is their Sergio Busquets who suddenly found a very good level in selection.

The return of the real Busquets

The defensive midfielder, who had already improved La Roja following his return from isolation at the Euro, has again proved that the national team remains essential.

Against Italy (2-1 victory) as against the France team (2-1 defeat), Busquets directed Spain’s game perfectly, with impressive ball outings under pressure. It is also his good coordination in pressing that allowed the Spaniards to stifle their opponents. Not to mention the quality of his long game, the image of his decisive pass for Mikel Oyarzabal against the Blues on Sunday.

We understand better why the Barcelona inherited the armband of Sergio Ramos. He is our captain for the values ​​he transmits, and it is a pleasure to see him play on the field, incensed the coach Luis Enrique after the final. It is our mainstay in attack and defense. It did not escape Robbie Keane, one of the UEFA observers who awarded him the title of Final 4 MVP. He controlled both games, he dictated the game and he made the players around him better. , how did the former striker.

We are far, very far from the Busquets picking it up on the side of Barcelona! Since the start of the season, the 33-year-old midfielder seems lost, lacking in energy and sometimes unmotivated. Its titular place is only due to its status and the absence of competition. But it is clear that the problem comes from the Catalan context. We can for example cite Luis Enrique’s 4-3-3, a system with which Busquets grew up at Masia, and which Bara coach Ronald Koeman tends to abandon for a defense 5.

It is also obvious that La Roja benefit from a much better organization, while the Blaugrana often find themselves at the club, where the team evolves lower. So many things to take into account for the Dutch coach, who may have noticed that his central defender Eric Garcia had also shown a better face in selection. And this is certainly no coincidence.

In your opinion, how do you explain Sergio Busquets’ metamorphosis with Spain? Do not hesitate to react and discuss in the area add a comment …