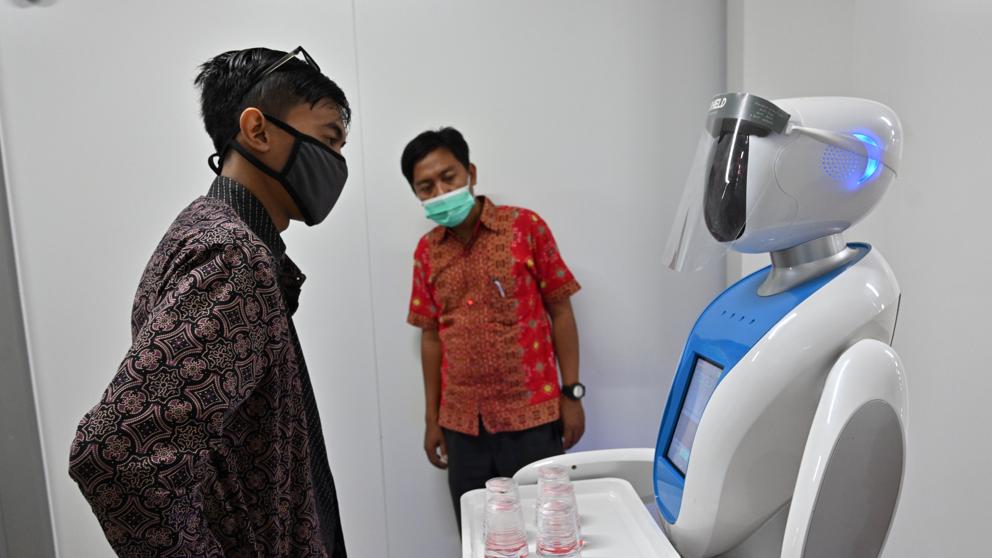 The potential of robots to distort the labor market it’s been evident since Fritz Lang introduced the android Maria in the plot of his movie Metropolis. (1927). A more recent image is that of gardening robots from Mysterious Ships (Douglas Trumbull, 1972), in charge of caring for the last forest on Earth, which wanders through space in a large bubble.

In some areas, that threat has already materialized. Although the worst is yet to come. The worst, so to speak, would be the horizon drawn by the economist Richard Baldwin in his brilliant The globotic seizure: globalization, robotics and the future of work (Antoni Bosch Editor, 2019). Baldwin raises the explosive combination of globalization and robotics with the appearance of teleimmigrants robotic, delocalized beings who, from their invisibility, threaten the employment of millions of professionals and service sector workers, with a fatal impact on cities.

One of his most striking examples is the robot Amelia, blonde and with blue eyes, telephone assistant to twenty large companies from all over the world. She is a tireless worker capable of recognizing the characteristics of her interlocutors and adapting her conversation to each client. Its effectiveness and loyalty make it unbeatable. Its creator is Chetan Dube, from IPsoft.

So far the dystopia. Sometimes extreme crises are necessary to discover realities that had gone unnoticed. Robotics has other faces: at the same time that there are robots that endanger employment and therefore are unpopular, there are others that help that same employment can be developed with security guarantees for the human worker. They are assistance robots, not always anthropomorphic.

In the coming months, the robots that the countries are acquiring for the campaign will be highly visible. Covid-19 mass analysis. Four of them are already in Spain (two in Barcelona hospitals) with the function of analyzing 70,000 PCR tests per week. Others, more showy, take the temperature in public places to the inhabitants of other countries that are already in phase of lack of confidence.

Is this pandemic going to be the occasion for the majority of the population to discover, also, the friendly face of robotics? We transfer the question to the researcher Carme Torras, mathematician, robotics and artificial intelligence expert and novelist. For the team that he directs at the UPC-CSIC Institute of Industrial Robotics and Informatics, he affirms, this is an opportunity to make his work with robots that can help a patient eat or dress, among other functions, visible. In a context of extreme risk of infection like the current one, the role of the robot takes on even more weight, since its use helps to avoid contagion from groups as exposed as the sanitary or the hospital cleaning.

Carme Torras leads a ambitious project financed by the European Research Council and which investigates the manipulation by robots of textile material, much more difficult to handle, obviously, than the rigid one. The project Clothilde It has an evident development in the healthcare field, since it will help older or disabled people to dress.

Torras confirms that Barcelona is a city of global reference in robotics. The company Pal Robotics has its headquarters in the Catalan capital, with which the Institut de Robòtica maintains a very close collaboration, since it allows it to have hardware that previously had to be imported. What would it take to position yourself even better? The reference is the Swiss Center of Excellence in Robotics. “In this sense,” says Carme Torras – a first step would be to expand the IRI assisted life laboratory to establish a Catalan benchmark infrastructure in health technology, such as the Bristol Assisted Living Studio.

IRI is no exception. Research centers need resources to strengthen their collaboration with companies, to retain and attract talent, including Catalan researchers who are now abroad. The challenge for administrations is enormous: to attend to the pressing needs of a suddenly impoverished citizenry, while continuing to provide resources to research institutes that are to lead the transformation of an already obsolete economic model. It is understandable that the current emergency makes it difficult to see the opportunity to drive a paradigm shift. But re-entrusting everything to sectors overexposed to a horizon of pandemic threats is a risky investment in the long term.

Carme Torras is a strong supporter of Barcelona’s commitment to becoming a hub of technological humanism, taking advantage of the presence in the city of important research centers and the technological ecosystem that revolves around the Mobile World Congress. Torras is the author of a series of texts on technoethics that are used by the Massachusetts Institute of Technology. In an interview published in the Magazine from The vanguard, He stated that one of the reasons he sees the future of robotics positively is that “Robots can give us a lot of time.”

The emotion before the authentic work

In conversations with heads of cultural institutions a question arises: What will be the reaction of the citizens once the museums reopen and they can attend, with restrictions, plays or musical performances? Everyone assumes that it will enter a period of a certain cultural autarky, motivated by the absence of tourism. Will the local population frequent cultural institutions or will they prefer to avoid the hassle of social distance measures? A museum director is confident that, after months of compulsive online consumption, the emotion of contemplating the art live will prevail.

Finally before the Minister of Finance

The world of culture is waiting to see what the measures discussed on Friday with the Ministers of Culture will materialize, José Manuel Rodríguez Uribes, and the Treasury, Maria Jesus Montero. There is a debate between skepticism and fear that the aid that has to come will come too late. Among other things, its representatives complained about the lack of response to requests for credits from the ICO. But sources of those attending the telematic meeting do appreciate that for the first time in many years the sector was able to negotiate with whoever really decides: the head of the Treasury.

Iranian museums are getting free internet to attract more audiences

Coronavirus: the resumption of Ligue 1 and the specter of injuries