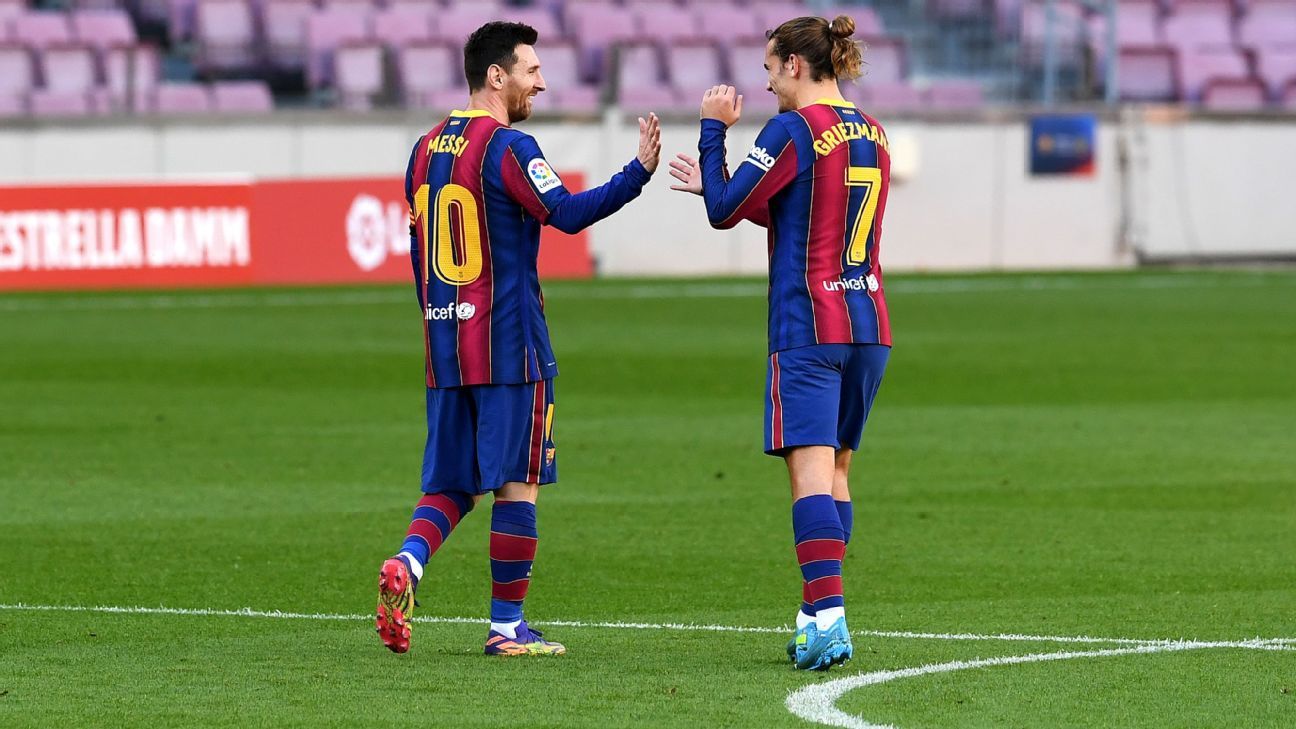 BARCELONA (Jordi Blanco, correspondent) – Maradona in the box, with a photo of 10. On the electronic scoreboard, with an image, in the minute of silence dedicated, in the flowers with his number placed on the grass … AND in Messi’s goal, the final, heartfelt and direct tribute from a Barça that was able to pay its special tribute to D10S.

In this way, Barcelona finally returned to link two consecutive victories in the League, responding to the defeat of Real Madrid against Alavés with a solvent defeat (4-0) over Osasuna who resisted the initial draw for half an hour and was he was dismissing the game at halftime, collapsed by goals from Braithwaite and Griezmann.

Coutinho and Messi closed the win in the second half, in which the referee annulled a goal to Dembélé before Lio could pay his particular and personal tribute to Maradona, after the 4-0 that he celebrated by taking off the Barça shirt and showing the one that He wore under Newell’s, with the 10 on his back. A t-shirt, that of the lepers, that both Lionel and Diego share in their history.

Dynamic, agile in his legs and head, firm in the idea and confident in his plan, Koeman’s team repeated a first half as convincing as was the second in Kiev, without reaching the level shown in Ukraine but solvent in his game and without fear of error.

The coach opted to give continuity to Braithwaite in the center of the attack and the Danish responded with his third goal in two games that ended the resistance of an Osasuna contestón but inferior, more occupied in defending the Barça combinations than in finding the goal of Ter Stegen, although the local goalkeeper had to intervene on more than one occasion, always with success.

At ten minutes Coutinho brushed the goal, after an assist from Griezmann that saved the Navarrese defense under sticks and after up to three occasions it would arrive 1-0, in a usual play in combination of Messi with Alba, which led this time in the Closed center and satin from the side that finished off the body of goal Coutinho before Braithwaite needed two shots to finally end the resistance.

The goal calmed Barça’s spirits, well in attack, firm in defense but not very successful in a midfield where Pedri, De Jong’s partner in midfield, never found his place, to the point that the coach resolved to substitute him during the rest by Busquets, who reappeared after the muscle injury he suffered with the national team.

Before, however, reaching the end of the first half, Griezmann’s goal would arrive, with a shell from outside the area after a rejection of the Osasuna defense to which Herrera could not respond except with a look at the spectacularity of the shot from the French, who for the first time since arriving at Barça linked two games scoring.

If the first half of Barça was good, the second was better, with more freshness and less opposition from a rival who came out wanting to get into the game with a goal but ended up quickly, realizing the impossibility of putting the player in trouble. Barça team.

Two arrivals of the Navarrese team gave way to the local response, one would say that furious and that led to Coutinho’s 3-0, magnificently assisted by the reborn Griezmann and before Dembélé, who had just entered the field, was annulled a goal.

With rhythm and solvency Barça sought more, especially it would be said so that Messi could have his special role, his way of paying homage to Maradona … Until the moment arrived, at 73 minutes and thanks to a distant blow from the captain that meant the 4-0 and the immediate celebration of Leo, showing that Newell’s shirt, the first that he wore as a child and that Diego also defended in the last years of his career.

It was the icing on the cake of a friendly, calm and optimistic afternoon. A win to believe. And to pay homage to a Maradona whose figure was present at the Camp Nou.