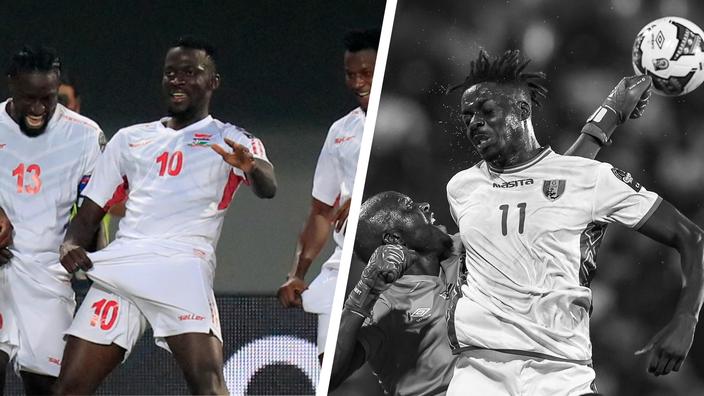 Musa Barrow and Tom Saintfiet are the men at the heart of Gambia’s exploit, which eliminated Guinea in the round of 16 of the CAN (1-0).

Barrow liberates the Gambians
The hero of the Gambian exploit. Thanks to the goal of their number 10, the Scorpions overcame Guinea, yet the favorite of this round of 16 (1-0). Their salvation could ultimately only go through the striker from Bologna (Serie A), scorer full of composure in the 71st minute. Previously, he had multiplied attempts in all positions, from the direct corner (6th) to tight angles (7th, 59th), even on a free kick far too off-center (65th). His sixth attempt (out of 7) will have been the right one.

And immediatelyThe surprising Gambia leaves Guinea and will see the quarters

Saintfiet, beautiful wizard look
The myth of the “white wizard” still has a bright future ahead of it. After several experiences without much relief in other African nations (Zimbabwe, Ethiopia, Togo), the Belgian coach managed the feat of qualifying the modest 150th FIFA nation for the quarter-finals of its first AFCON. A remarkable and deserved performance in view of the offensive tendencies conveyed by Saintfiet, as quick to encourage his players as to defend his troops, whose accommodation conditions he denounced on Sunday, and argued in favor of favoritism against small teams. By putting The Gambia on the map of African football, everything could change.

Bayo ate the leaf
On the bench against Zimbabwe during the last group match (1-2), the Clermont striker did not take advantage of his forced rest. If he signaled himself from the start by missing the target (3rd), he especially lacked promptness by being taken over by the Gambian rearguard before the break (38th). Hardly more visible after half-time, the slender center-forward did not press his head enough on a corner (76th), before going out. A premature exit which will at least make Clermont happy, the promoted currently fighting to stay in Ligue 1.

Conte overtaken
A serene and even solicited time on the offensive fixed phases, the defender of Niort sank after the goal of Barrow, on which his responsibility is engaged as he is slow to come out on the Gambian striker (71st). His goal disallowed for offside did not help the affairs of the Guinean defender, warned for a violent screen (81st) before being sent off ten minutes later following a second yellow card.