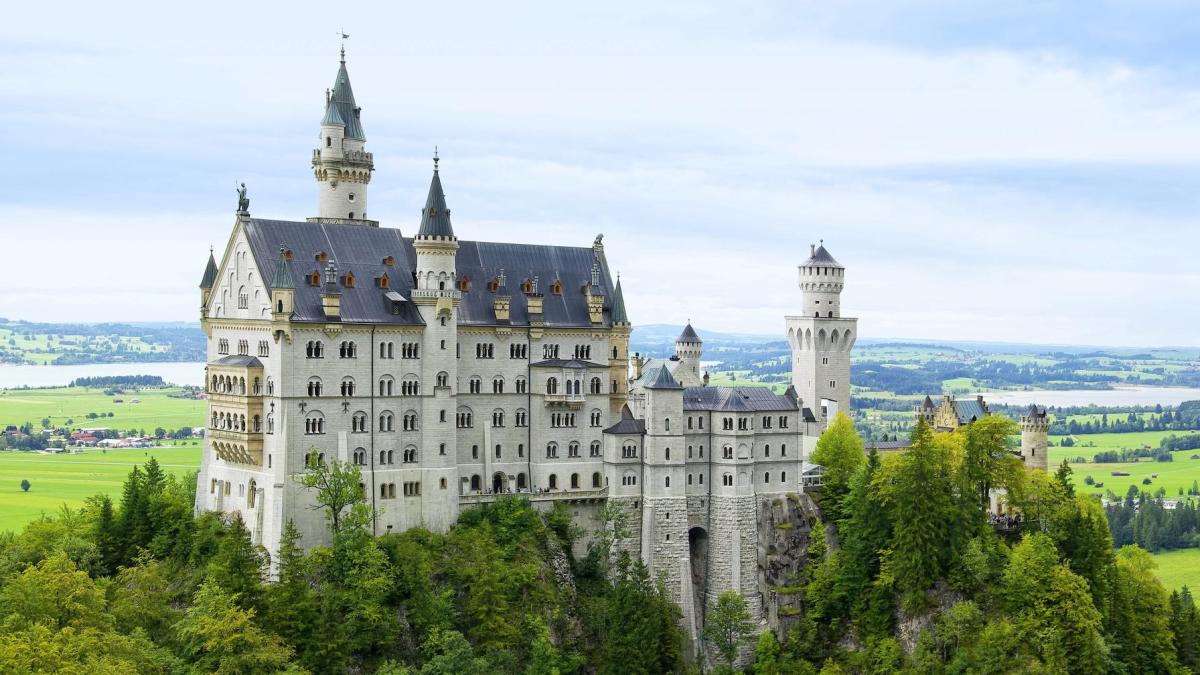 Dhe white limestone and the stucco work on portals and windows shine far into the country. From a hill, the castle dominates the surroundings and lets the mountains become a backdrop. No question about it: Neuschwanstein wants to impress. For the client, the Bavarian King Ludwig II, it was about effect, about representation.

Uninvited visitors, on the other hand, were not so dear to him: “The king hated nothing more than when people visit his castle in his absence, let alone during his stay.” This is passed down through the king’s messenger, Max Maier.

The castle was intended as the king’s retreat when construction began in 1869. However, just seven weeks after his death in 1886, it was opened to the public and is now one of the most-visited sights in Germany; before Corona, 1.5 million curious people came every year. Although the building was never completed, at least not according to the great plans of its creator.

In midsummer, visitors queue for up to three hours to even get a ticket – which is then only valid in conjunction with a guided tour and for a specific time. The ticket center is often sold out by lunchtime. This year will not be an exception, because as soon as the Corona restrictions fall, the village will be flooded again with travelers.

However, there is a way to avoid the tourist crowds and still enjoy spectacular castle views. Strictly speaking, it is a detour that is no secret, but is avoided by most day visitors. Because mountain boots and surefootedness are a prerequisite for this.

View of Neuschwanstein and Hohenschwangau

The valley station of the Tegelbergbahn is less than two kilometers from Hohenschwangau. Here, too, there is activity in the summer, but the busloads of tourists are mostly absent. The gondola lift has been transporting hikers almost 900 meters upwards since 1968, and even the ride opens up fabulous views of Neuschwanstein Castle.

The Tegelberg is blessed with gastronomy and a network of signposted hiking and walking trails. Two of them, the Schutzengelweg and the Marienbrückenweg, which start below the mountain station, offer good to fantastic views of the castle. And if you want a majestic all-round view of the Allgäu and Tyrolean Alps, you can make a detour to the summit on the Königsrunde panorama trail.

The Guardian Angel Trail, which leads past the Rohrkopfhütte, is moderately difficult, for the 890 meters you should estimate two, better three hours. On the way, a beautiful view of Neuschwanstein and Hohenschwangau opens up again and again between the trees of the young forest.

The Marienbrückenweg offers a much better panorama. The well-marked path leads over the northern flank of the Tegelberg at around 1400 meters and then descends in steep curves. Because of the descent it is classified as difficult, but anyone who wears sturdy shoes, is mountainous and in good physical condition should not be put off by it.

The hike is worth the effort

This tour usually takes around 3.5 hours. But at the moment you cannot walk the full length of the Marienbrückenweg because the Marienbrücke at the lower part of the path is closed due to renovation and the Pöllat Gorge due to the risk of falling rocks. Those who descend the path have to climb the same route again afterwards and take either the cable car or one of the other hiking trails to return to the valley.

But the effort is definitely worth it, because almost every bend in the upper part of the Marienbrückenweg offers a fabulous panorama not only of Neuschwanstein, but also of the Alpsee and the Tannheimer Mountains in Tyrol behind it. And because the path is currently a dead end, it is used by even fewer visitors than usual; you can enjoy the magic of the landscape better than ever.

First it goes gently up and down for about 30 minutes until Hohenschwangau Castle, the predecessor model of the fairytale castle, comes into view – built by Maximilian II, the father of Ludwig II. The Marienbrückenweg only becomes more difficult during the following descent, which is rocky in places and, in good Bavarian, sausteil is.

However, this section offers the most spectacular views of Neuschwanstein. If you skip it, you will miss out on the best positions for Instagram motifs and one of the most impressive goose bumps the Alps have to offer. And the downhill and uphill clamber doesn’t take more than two hours anyway because of the Marienbrücken closure.

Walt Disney made the castle in Bavaria world famous

The Marienbrücke is one of the photo hotspots in Europe, at 90 meters above the Pöllatfall, usually countless tourists jostle for selfies with the castle in the background. Neuschwanstein visitors will probably have to do without this until 2022, the renovation work should not be completed until next year.

And so it will be even more crowded this year and next in the castle and in its immediate vicinity than before Corona. Because among foreign tourists to Germany, Neuschwanstein has a reputation like Donnerhall, whoever is in the country wants to see it.

Not entirely innocent of this was Walt Disney, who used Ludwig’s turret-battlements dream as a model for his Sleeping Beauty’s castle. This is how Neuschwanstein became world famous, and today there is an image in every Disneyland. In Dalian in the Chinese province of Liaoning, a billionaire has gone one step further and has opened a luxurious and pompous copy of the original with the hotel “The Castle” – not without adding a few floors.

If this is considered a sacrilege, it should be said that Neuschwanstein itself is not without its faults. A castle has stood on the rock that now supports the castle since the Middle Ages. Of this, however, only a few piles of stones were left when Ludwig II began building Neuschwanstein, which in turn is nothing more than the fantasy of a knight’s castle. The castle has just as little to do with the Middle Ages as Disney’s version or that of the Chinese billionaire.

To escape the crowds, we would recommend going down behind the bridge into the Pöllat Gorge. The gorge is overlooked by most day tourists. Half a kilometer is over well-secured metal stairs down through the gorge, the roaring water chokes every sound.

However, the gorge is currently closed, which has nothing to do with Covid, but with a geological report commissioned. Its findings are awaited in order to be able to assess whether further security measures need to be taken or whether they can be reopened soon.

Ten minutes’ walk from the Tegelbergbahn valley station is the “Reith-Alpe”. The inn has reopened the outdoor catering since the end of May, you can stop here every day, except “when the weather is bad”, like the website warns. A young team of three has taken over the management, since then a fresher wind has been blowing on the “Alpe”, but the rustic inventory and an unpretentious snack menu have remained. One of the regular guests is a local original: Zechl Max was a tour guide at the castle for years, now he sometimes helps out at the bar.

If you give him a deer kiss, the local herbal schnapps, he likes to start talking. Then you learn more about the castle and the king than on any strictly timed sightseeing tour. For example, the real reason why Neuschwanstein was left unfinished.

Of course, Ludwig was notoriously clammy, says Zechl, but it was actually his rabble-hearted servants to blame. The king sent her to Frankfurt to break into the Rothschild banking house. If the servants hadn’t gotten any scruples on the way and had returned with millions instead of empty hands, Neuschwanstein would look even more splendid today.

Getting there: Either by car directly to the car park at the valley station or by train to Füssen, from the train station by bus to the Tegelbergbahn.

Tegelbergbahn: Cable car operations have been resumed since May 22nd, mountain rides between 9 a.m. and 5 p.m., tickets for a single journey cost 17 euros (reduced for children and young people), tegelbergbahn.de.

Hikes: The Marienbrückenweg is eight kilometers from the cable car mountain station down to the valley station. Due to the renovation-related closure of the Marienbrücke, only the upper part of the path, which offers the best views of Neuschwanstein, is currently accessible. Mountain experience, a head for heights and surefootedness are prerequisites for using the path. The Guardian Angel Trail is shorter and easier to hike, and here, too, you have beautiful views of the castle in places. The Ahornreitweg is the easiest, but there is no mountain view of Neuschwanstein from this hiking trail.