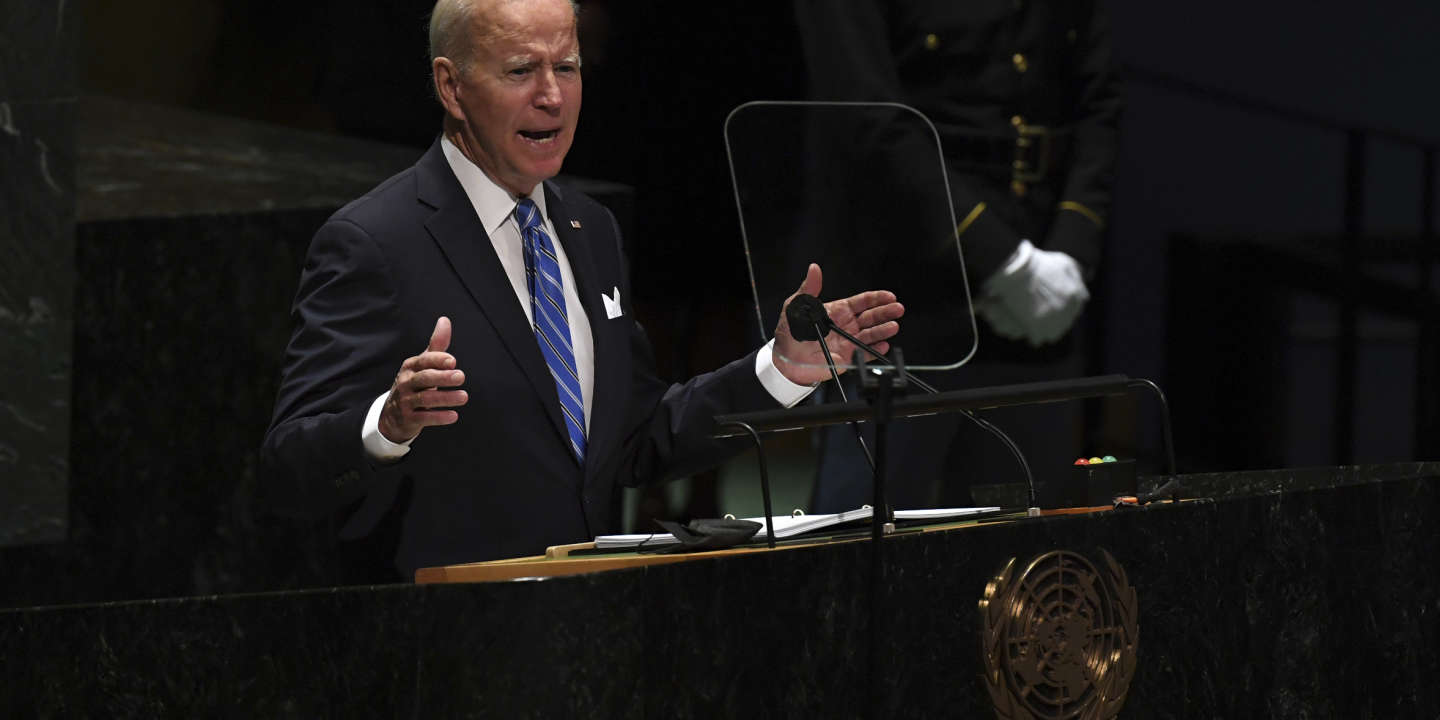 “We are not looking for a new cold war or a world divided into blocks” but the United States will defend its place in the world “Vigorously”. Joe Biden, the President of the United States, wanted to break, Tuesday, September 21, before the Annual General Assembly of the United Nations (UN), with the martial tone and unilateralism of his predecessor, Donald Trump.

“The United States stands ready to work with any nation that engages and seeks a peaceful resolution to share the challenges, even though we have intense disagreements in other areas.”, he said. However, “The United States will participate in the competition, and participate in it vigorously”, he warned by delivering his vision of the confrontation with Beijing, without directly naming the rival power. “With our values ​​and our strength, we will defend our allies and our friends, and oppose the attempts of the stronger countries to dominate the weaker”, he hammered. President Biden, engaged in a fight against « autocracies », also promised to “Defend democracy”.

His speech was to be followed during the day by that of Chinese President Xi Jinping, by pre-recorded video, in a distant duel between the two superpowers, engaged in a confrontation which is escalating.

For his first intervention in front of a hundred heads of state and government, as well as dozens of ministers, the President of the United States made a point of responding to the Secretary-General of the United Nations, Antonio Guterres, who in his speech of openness had evoked the rivalry between the United States and China and warned against a further degradation of the world.

Mr. Guterres, in the last year of his first mandate at the head of the UN and who will begin a new one in January, had already mentioned in 2018 the « division » Chinese-American, then in 2019 “The great divide” before discussing in 2020 a “New cold war” and the risk of a bipolar world trapped in Sino-American tensions. This year he said he feared “That our world does not move towards two different sets of economic, commercial, financial and technological rules, two divergent approaches in the development of artificial intelligence – and finally two different military and geopolitical strategies ”.

America’s “return” as a reliable partner

This speech by Joe Biden was an opportunity to highlight the ” return “ of America as a reliable partner to its allies who were abused during Donald Trump’s four-year term. But the withdrawal from Afghanistan, which ended in chaos at the end of August to the chagrin of many European countries, then the open crisis with France in the submarine affair, which erupted last week, have completely scrambled his message.

Mr. Biden nevertheless insisted on defending the American withdrawal from Afghanistan, a necessary step to close the chapter of “Ceaseless wars”. Criticized for the chaotic conditions of the departure of the American contingent from Afghanistan, he said he was determined to defend the vital interests of the United States but “The mission must be clear and achievable”, he pointed out, and the US military “Should not be used as the answer to every problem we see in the world”.

The United States will fully return to the Iran nuclear deal if Iran ” do the same “, added President Biden, promising to prevent Tehran from acquiring the atomic bomb. “The United States remains determined, ready to prevent Iranian nuclear weapons”, he reaffirmed. ” We work “ with the permanent members of the Security Council (France, United Kingdom, Russia and China) as well as with Germany “To obtain diplomatically and in full safety the return of Iran in the nuclear agreement”, he clarified.

Iran nuclear negotiations set to resume ” in the next weeks “, for his part said the spokesman for the Iranian Foreign Ministry Saeed Khatibzadeh, who made the trip to New York.

Efforts against the pandemic and climate change

Joe Biden has pledged to step up US international efforts to tackle both the pandemic and climate change. Washington goes “Announce additional commitments” to boost vaccination in the least developed countries on Wednesday, during a virtual summit organized by the United States.

The US president also promised to “Double again” the amount of international aid granted by the United States to the least developed countries to deal with climate change, without specifying the amount.