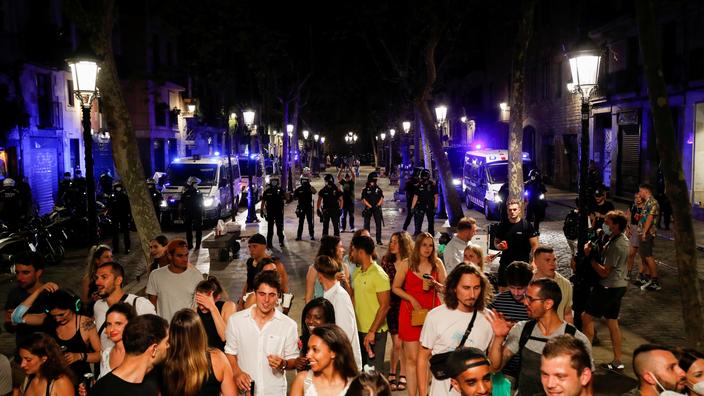 TESTIMONIALS – Despite the re-establishment of the curfew in the Barcelona region, travelers from France manage to enjoy their nights in defiance of the restrictions in force.

In summer, Barcelona is usually one of those cities that no longer sleeps. Its bars, clubs and nightlife keep locals and millions of tourists spellbound until daybreak. But once again, the pandemic has come to play the spoiler.

Faced with the outbreak of contaminations due to the Delta variant, the Catalan authorities decided on Friday July 16 to re-establish a curfew in Barcelona and in 161 surrounding municipalities. All night-time establishments are therefore forced to close shop between one and six in the morning, and revelers to return to their homes.

A situation which does not seem to disturb the young French people, however, who have come to visit the city. “I live it pretty well», Says Nolwenn, 27 years old and product manager in an IT company. “Until midnight we have time to go for a drink, it’s not like 6 o’clock. And then the gauges are ten people hereShe adds. A feeling shared by Alexandre, 22 and a business school student. “Personally, I don’t see the difference», He affirms. “When everything closes, we go to ‘house parties’ students [soirées en appartement, NDLR] to continue the evening», Confides the young man.

Many underground parties have been organized in Barcelona since the start of health restrictions a year ago. A phenomenon which continues with this new curfew and which does not only concern individuals. “Saturday night I went to an illegal club, reveals Léna, 22 years old and also a business school student. It was in the basement of a hotel, there must have been about fifty or more!»

On the avenue de la Rambla, the main artery of the coastal city, controls are rare, even after the fateful hour. Composed of the Civil Guard and the Esquadra Mossos [la police spéciale catalane, NDLR], the police devices watch revelers parading more than they call out to them. “You just have to behave well and not stand out», Notes Alexandre.

Read also :Spain: return of the British with the lifting of the quarantine for vaccinated tourists

Similar observation on the beach of La Barceloneta, which, after one o’clock in the morning, still saw many people gathered on the sand, the crowd not having been completely dispersed until after two o’clock in the morning because “many settle at the ends of the beaches in order to postpone the moment when they will be dislodged (by the police)», Léna analyzes.

On the protocol side, most Catalans continue to wear the mask although it has not been mandatory outdoors since June 26. “Overall, locals are more respectful of measures than tourists», Observes Alexandre. “Foreigners know they have very little chance of getting a fine since they don’t reside here», Explains Léna.

The uncertain future of summer tourism in Spain

But this tolerance may well be short-lived. If the curfew is officially in force until Friday, July 23, the justice plans to extend it until August with a strengthening of the police systems.

The incidence rate of the virus is particularly alarming among young adults. Last week, the 20-29 age group had 3,000 cases per 100,000 inhabitants. These figures are partly explained by the late eligibility of this population for vaccination.

Second world tourist destination, Spain is trying to save the season despite its sanitary fragility. If British reservations are soaring, the country has however just classified at risk three regions of metropolitan France in addition to the overseas territories already stamped “red” by the authorities.