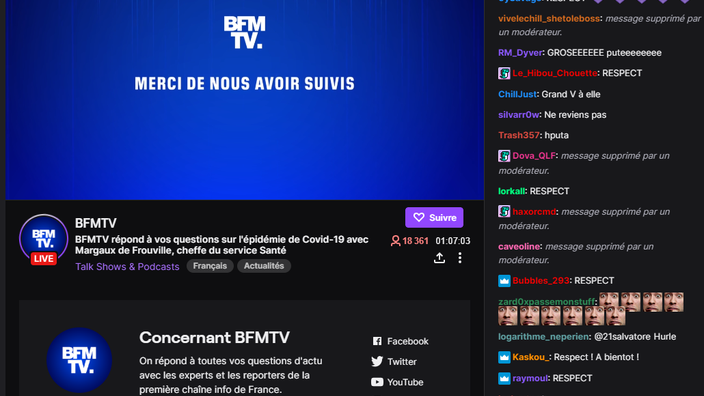 BFMTV inaugurated a new format on the live video platform on Wednesday evening in the face of a hostile chat.

«Show us your butt», «give us a roomtour” or “release journalope“: The beginnings of BFMTV sur Twitch were badly received by the regulars of the platform. The continuous news channel launched on Wednesday on the live video platform with a question-answer format around the Covid-19.

In front of the camera, Margaux de Frouville, head of the Health service, tried to answer questions from Internet users. A complicated exercise, when 22,000 people were already present for this first edition and the messages, often hostile, paraded at full speed in the chat space. The calm and professionalism of Margaux de Frouville were praised by some of the spectators.

Another live scheduled for March 11

While part of the public played along and asked about the vaccination, others came just to “troller», Make fun of the journalist, insult her and write obscene comments. Behind this flood of insults, we suspect the influence of the jeuxvideo.com forum, which was mobilized on Tuesday. The discussion on this forum was quickly closed by the moderators.

Twitch users throughout the day lamented that BFMTV, a channel they deem hostile to video game culture, is making its debut on this platform. Some hoped that the “trollers“Would show up for”defend our last stronghold“. Others explained that they did not want to see TV channels coming to Twitch “by opportunism».

Moderators play a very important role in managing a live stream on Twitch. But despite a “slow mode»Activated to slow down the display of messages, dozens of comments appeared every second. Small sample in video:

The BFMTV channel follows a movement of traditional media migration, to conquer new audiences, on this video platform popular with 18-35 year olds. A new wave inspired by the success of France Télévisions journalist Samuel Étienne, which brings together up to 80,000 spectators every day on its press reviews.

BFMTV is planning another live on Twitch. On March 11 at 9 p.m., journalists Matthieu Croissandeau and Fabien Randrianarisoa will comment on the interview with Marine Le Pen in the program Face à BFM.