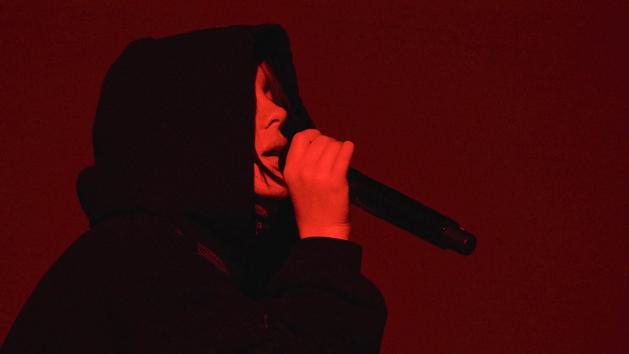 The virus killed the concerts. Long live the concerts. Or rather the experiments, especially on the Internet. Singer Billie Eilish rose to the challenge and sang in front of her fans during a virtual concert magnified by virtual reality. The event marks the end of his tour entitled Where Do We Go ? “Where are we going ?”. A series of live performances interrupted, as for many artists, by the pandemic.

Loose sequined clothes, socks and high shoes, green hair: the 18-year-old star is in place. She is about to launch a show of just under an hour, too little to the fans’ taste, already quite enough given the period. “I wanna end me» («I wanna fuck myself”) We hear as a preamble. The silhouettes of the singer and her two musicians stand out against a uniformly red background during a performance of Bury a Friend most chilling. Virtual reality transforms the stage into a painting in which the artists who are trapped in the canvas sing, dance and play.

We then witness one of the most impressive demonstrations of the artist’s universe with You Should See Me in a Crown. During his high-end performance, a gigantic spider appears alongside the three musicians. The disturbing atmosphere and the grandiose spectacle are simply spellbinding.

Always fair, Billie Eilish ends this track with a smile on her face. The audience feels like a release emanating from the singer, happy to be present and sad to be so distant from her audience. Accompanied by her brother Finneas on guitar, she continues with a less bombastic track: I Love You. The emotion is palpable through his deep voice. An emotion that continues with Ocean’s Eyes.

She plunges to the depths of our souls with Ilomino, visually supported by an exploration of the seabed. Immersion is total. The little cinematographic aside with No Time to Die, original music of the next James Bond, drastically moves away from the singer’s universe and allows the show to breathe.

All the Good Girls go to Hell comes to close this chain of titles which all carry one and the same message: No Music on a Dead Planet (No music on a dead planet). Billie Eilish, still an activist, reminds her American fans to go vote for the presidential election on November 3. With his words: “The world is dying, people are dying, and Trump is the worst of men.»

In a wall of small windows, spectators appear. Their eyes light up when the first notes ofEverything I Wanted. There is no longer a screen between the singer and her fans.

Hope is allowed? She seems convinced of this with her latest title, My Future. A new painting, similar to the clip, appears. While his voice cradles the viewer, the camera wanders through this kitsch cartoon universe.

Bad Guy will be his last swerve towards new horizons. The red background has returned, the silhouettes reappear: a giant naked woman’s body overhangs the artists, like an allegory of the music that would dominate the world.