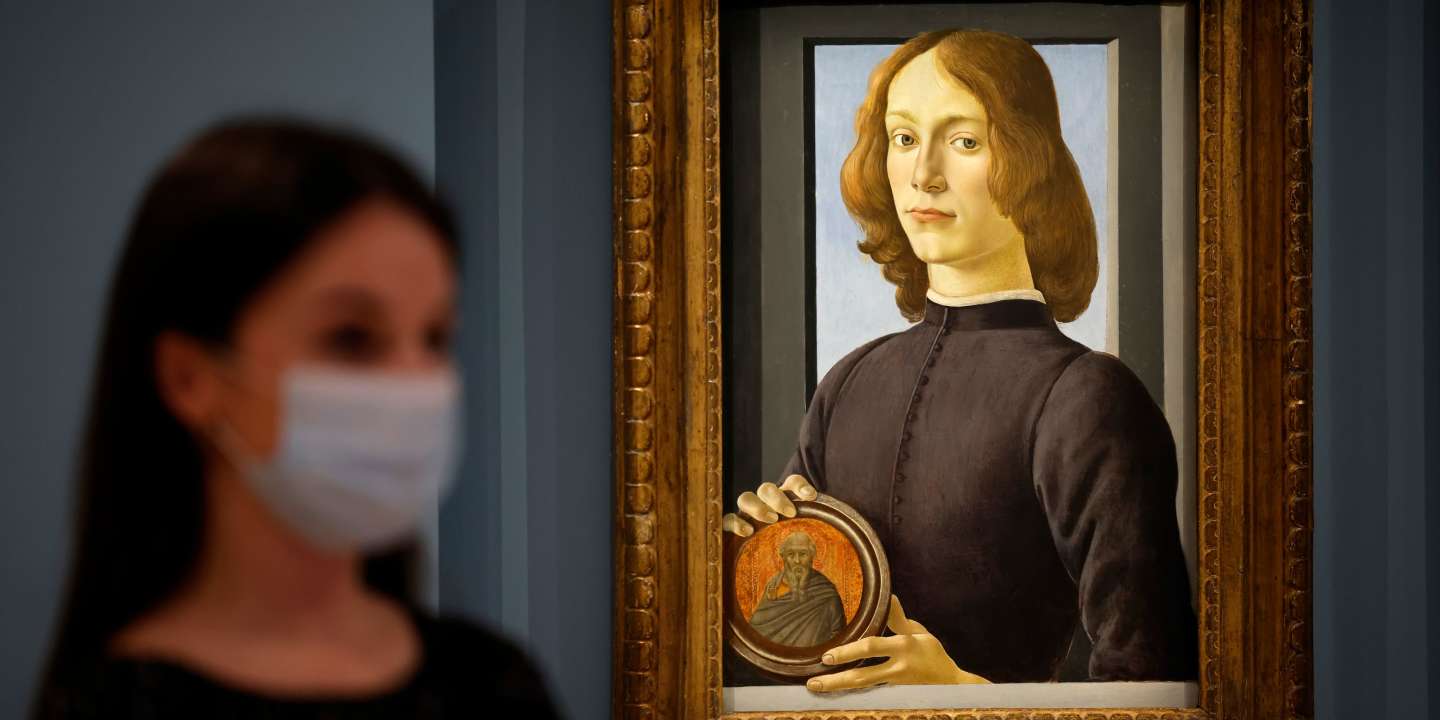 It was lot number 15. The Young man holding a medallion, a Sandro Botticelli’s painting was sold for $ 92.184 million (76 million euros) at a sale organized by Sotheby’s in New York, Thursday, January 28. At the end of a short back and forth between two collectors, a buyer giving his orders from London won with a final offer at 80 million dollars (65.9 million euros), a price at which s ‘add fees and commissions.

The Young man holding a medallion represents a young man with long hair. His identity is not known, but specialists believe he could be someone close to the powerful Florentine family of Medici. “This Botticelli is so much more impressive than anything we have seen on the market” emanating from this painter, argued Christopher Apostle, head of the old masters department at Sotheby’s in New York, before the sale.

Although over five hundred years old, this painting is in an exceptional state of preservation. Undated, it is believed to have been made between the late 1470s and early 1480s by Sandro Botticelli (1445-1510), born Alessandro di Mariano Filipepi. “This image symbolizes the Renaissance in Florence”, explained Mr. Apostle, this moment “Where everything has fundamentally changed for Western thought, art and literature”. “When you have a masterpiece coming up, people wake up, (…) whatever the period “even in the midst of economic uncertainty.

Its price is the highest since May 2019 and the 110 million dollars reached by Grinding wheels, by Claude Monet, at Sotheby’s in New York. The previous record for a painting by the Florentine master was set in 2013 by The Virgin and Child with the young Saint John the Baptist, sold for $ 10.4 million.

“When you look at a painting like this, which is so exceptional, you have to compare it to other masterpieces, paintings by Picasso, Bacon or Basquiat”, which have broken records in recent years, argues Mr. Apostle. Before this sale, only the Salvator Mundi, by Leonardo da Vinci, sold for 450 million dollars, had exceeded the symbolic threshold of 100 million dollars among the paintings of old masters.

New York real estate mogul Sheldon Solow, who died in mid-November, had bought Botticelli’s painting for 810,000 pounds in 1982 (about $ 1.3 million); the work has nevertheless been exhibited in many museums and for long periods. Mr Solow’s family has at one time considered establishing a museum in New York devoted to the collection of the real estate developer, whose Young man holding a medallion would have been the main attraction, before giving up.

Active market despite the pandemic

Despite the pandemic, the art market remained strong last year, notably with a triptych by Francis Bacon which sold for $ 84.6 million in June. Constrained by health restrictions, which in particular have deprived New York of public sales for ten months, the major auction houses have largely fallen back on online sales and have maintained a significant volume of activity.

A sign of changing times, Sotheby’s opened the sale at 10 a.m. (4 p.m. in Paris), rather than in the evening, unheard of for a sale of this importance. European and even Asian collectors were thus able to follow the auctions at a reasonable time.

Another event of these auctions dedicated to the old masters, a painting by the Dutch master Rembrandt, Abraham and the three angels, was withdrawn from sale at the last minute. Estimated at between $ 20 million and $ 30 million, it seemed positioned to break the record for a Rembrandt at auction of $ 33.2 million in 2009. “Even if we haven’t seen him in the hall today, he will still find a new home very soon”, Sotheby’s said.