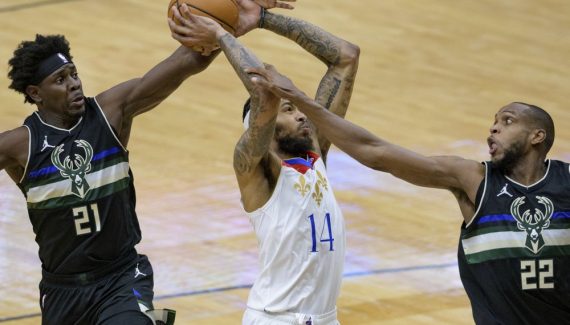 For much of the game against the Pelicans, Mike Budenholzer undoubtedly thought that he and his players were having a “night off,” as happens with any team in the course of a regular season. Those matches where the opponent walks on you, where nothing really works and where the gap grows over the minutes.

In the first period against New Orleans, there was a difference of up to 29 points! Then in the third quarter, after a basket from Lonzo Ball, there were still 28 points to fill. There were then 16 minutes to go. Therefore, what to do: put the holders in the closet or still try the comeback?

“It was a match that could turn and that we could win”, believes the coach of the Bucks at Milwaukee Journal Sentinel. “I wanted to give us a chance. It’s good to have to run after the score, it’s profitable to live this experience. Although it was not an easy decision to take, to shoot the players by giving them more minutes to play. “

“We want to stay, we want to try to snatch victory”

For players, as always in these situations, you have to work in stages.

“We cannot give up, we must continue to fight”, said Giannis Antetokounmpo. “We had to continue to play well. The idea is to come back to 20 points. Then, once we are at 20 points, we go back to 15 units. Then we go to 10 points. This is the state of mind to have. “

The Bucks, led by a five consisting of Antetokounmpo, Khris Middleton, Brook Lopez, Pat Connaughton and Bryn Forbes, will start with a 10-0. Lonzo Ball, again, pushes Milwaukee back and maintains the gap at 21 points (96-75). But Giannis and his band redouble their efforts and with a 14-2, they pass under the bar of 10 points (98-89).

We then enter a sequence, within this last quarter, where the two teams exchange baskets. There are six minutes to go and there is still a 13 point gap. New decision for the coach: believe it or let go.

“Leave me on the floor”, says Jrue Holiday, referring to his state of mind at this point in the game. “I know how competitive I and my teammates are. We want to stay, we want to try to win the victory. “

A bad habit this season

The Bucks will end up losing 131-126 after winning the second half (63-81) and especially passing a 38-61 following the basket of Lonzo Ball four minutes from the end of the third quarter. The reaction was impressive, but insufficient because the first act was missed in great width.

“We were hungry in the second half”, explains the MVP 2019 and 2020. “We have to be for longer. We cannot be led by 28 points, because then it’s very hard to come back. A gap of fifteen points can be closed. We have to play more like in the second half. “

It is therefore the eternal story of the glass half empty or half full. And this isn’t the first time this season that Milwaukee has been overwhelmed and failed after a comeback. Budenholzer’s men were already 17 points behind the Celtics, before losing a possession. Then, against Brooklyn, they had climbed eleven points in the third quarter, to lose two points. Well, the same story against Los Angeles recently.