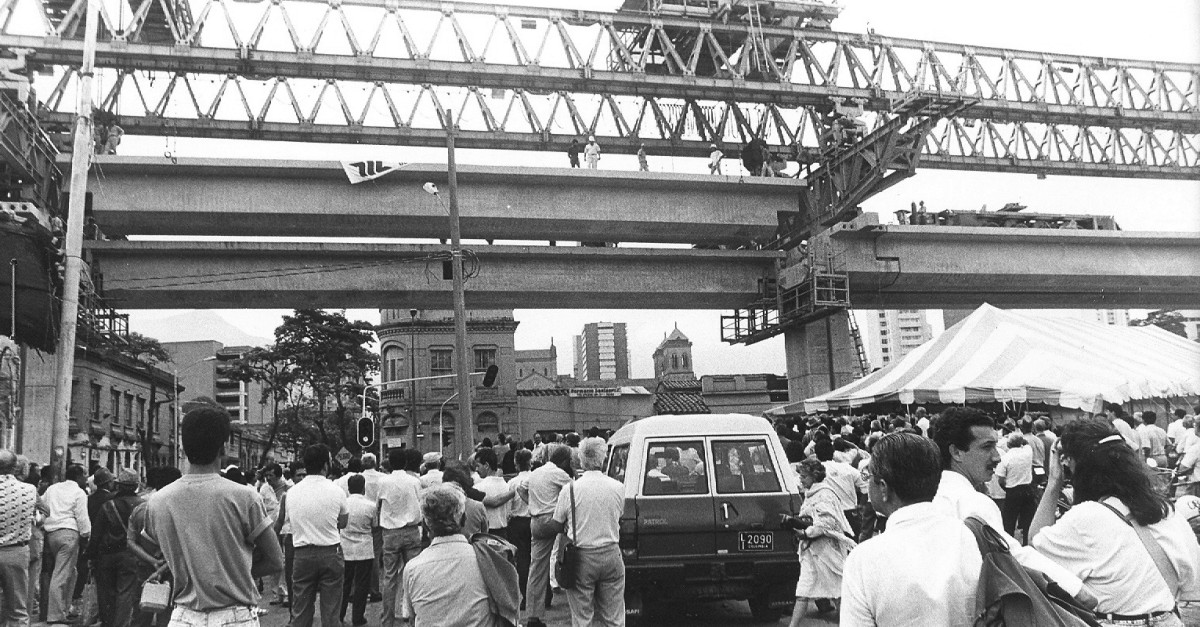 Mortally wounded, but rebellious in its agony, that city that bled to death in its own despair, where suddenly everything went dark, saw a train appear, like lightning that illuminates the confines of a plain.

Another was the crowd gathered in the vicinity of the Plaza Cisneros that morning of November 30, 1995, but it was the same sequence of March 1914 when the one that appeared, in the same corner of the then Medellín station, was the railroad.

Is that time, determined to let itself be carried away by its hazards, repeats its best scenes, as a kind of eternal return. The president said so Belisario Betancur, on July 12, 1983 at the Palacio de Exposiciones, when the tender to build the subway was opened: “Our story was never a rose novel, but a story made by force, of men faced with a hostile environment. A man who always in the middle of great crises undertook insane projects: Didn’t we build the railroad in full civil wars?

But Medellín felt retches of agony in the twilight of the century. It had six decades of industrial boom and bonanza, another of turbulence and two of emergency landing to the darkest depths, when it became the most violent city in the world in 1991, with 6,809 homicides (in 2019 there were 591). Murder, kidnapping, massacres, bombs were everyday life in the 80s and 90s, recalls the House of Memory.

And as if that wasn’t enough, in 1989, in addition to the rigors of the war against the Cartel, the city seemed like a trench, full of ditches and half-done beams because the transportation system, which had been in place for four years, was paralyzed. . The darkest night.

In the governor’s office Rodrigo Uribe EchavarríaOn May 31, 1979, the deed of incorporation of the Empresa de Transporte Masivo del Valle de Aburrá was signed. Their objective was an odyssey: to build and operate a metropolitan train that would go from Copacabana to Sabaneta along the river bank, without entering the Center. Another detail of the original project was that the section between Berrío and the Cundinamarca race was underground.

Whether or not to enter the Center was one of the many controversies that the project raised. It was said to be unnecessary, very expensive and very ugly. Then the criticism came from Bogotá.

Jorge Valencia Jaramillo, Mayor of Medellín between 1978 and 1979, recalled in dialogue with this newspaper two years ago that they did not understand why a metro was going to be built in Medellín and not in the capital. He took the financing proposal in halves (50%, Medellín and Antioquia; and 50% the Nation), but was criticized, even with editorials in national newspapers, for his audacity: “They said that Antioqueños were always quick with our heads to business”.

The lawsuit was closed like this: the Nation assumed 40%, while the region took over 60% of the value of the debt of the guaranteed loans that, at the time, were in dollars (the debt was unpayable like that, so much so that in 2004 it was restructured and payment would be completed in 2058). The preparation of the feasibility studies and the international bidding documents were carried out by the English firm Mott, Hay & Anderson and, in 1982, the project received the endorsement of the Nation and the fiscal quota necessary to contract it.

The first budget, Valencia said, was $ 650 million and ended up costing $ 2 billion.

When the contract was signed with the German Hispanic Consortium (CHA) that built the subway, on November 24, 1983, the objective was that in five years the train would run. But the first mess appeared.

The order to initiate the contract could only be made on April 30, 1985 because the CHA asked to readjust the price.

The works began in the midst of the economic hardship, difficulties for the imports of equipment and delays in the work plans by the consortium.

Then the city entered a dead end. Crumbling to pieces by the war that was gnawing at it and just in 1989, the year of horror, the CHA decided to suspend construction on November 30 for lack of money. He alleged more problems for the importation of machinery and the increase in expenses due to the change of route. Even thicker was the gloom.

Lightning on the plain

– General checkpoint, this is mobile one.

– On behalf of all Antioqueños, and as the first president of Colombians, I authorize the start-up of our metro.

Applause, little flags of Antioquia waving and the whistles of the trains that at 11:00 am made the inaugural route between the Alpujarra and the Berrío park. “It started!”, He titled the extra edition of EL COLOMBIANO that the town criers offered in that reverberation that was Medellín on the day he was resurrected.

But we have not yet reached that November 30, 1995. We left the works stopped in the worst days of the plague. Another white elephant, it was said. You see? It was an enchantment, they replied. The response against the widespread skepticism was a motivational campaign to get people to push too. With the support of the Colombian Industrial Bank, messages were spread in all corners: “He wants the subway, our great work”, “He wants the subway from now on”, “Let’s get to know our subway.” This campaign, which evolved according to the historical moment, is what we now know as Metro Culture.

The dispute, meanwhile, took diplomatic borders and the parties had to seek an agreement to resolve the conflict in which the Metro had already declared the expiration of the contract. It was arranged that a third party would resolve the differences, and on February 13, 1992, work was resumed in the middle of that trench that was Medellín, which was, in fact, in the middle of open heart surgery.

There, the messages of optimism increased, but also formative because nobody knew what it was like to ride modernity. “For the subway we only need inches of passion, inches of effort, inches of tenacity,” was heard from the speakers.

Then the school wagon arrived at the Palacio de Exposiciones and a school station in the Alpujarra to learn not to go over the yellow line, to use the red button and the blue lever, to use the Edmonson ticket and to identify the door closing beep.

The start-up training lasted six months, which, by protocol, had as its starting point a button that President Samper would operate from the Alpujarra.

—By pressing this button, I declare inaugurated and start up the first metro in Colombia, the pride of the country.

Diego Alberto Giraldo Arroyave, the first conductor of the subway and today head of infrastructure, told in a documentary about the 25 years of the system: “I saw when people began to enter the Alpujarra station. It was very exciting to see them arrive, they would knock on the window and even ask for our autograph ”.

On the station loudspeakers it was heard: “We did it. For being strong, for being capable, for fighters, for believing, for having faith ”. Since then, that white ribbon has not stopped snaking on this plain that lit up like lightning since it first appeared. Hope travels in there.