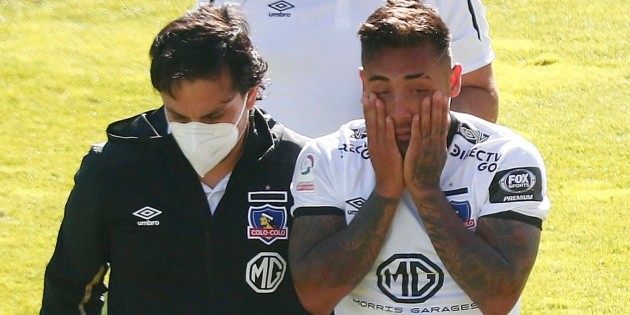 Marcos Bolados scored a good left-handed goal to equalize Colo Colo before Everton at the close of date 16 of National Championship but, on the next play, he went from euphoria to grief: after jumping, he fell badly, levered his right knee and couldn’t continue on the field of Sausalito Stadium.

The Antofagastino left crying, knowing that his injury was not simple. And he finished the game with a splint that immobilized the joint. “We hope it is not serious”, said his coach, Gustavo Quinteros, after engagement, something that was not “fulfilled” 24 hours later with a very clear medical report from Pedrero.

“In yesterday’s game, October 28, 2020, he suffered Grade 3 sprain of the medial collateral ligament of the right knee. Today (Thursday) he completes evaluations with the club’s medical staff to determine definitive treatment, ”the document said.

Well, those evaluations ended this afternoon and they were categorical: as RedGol learned, Marcos Bolados needs to be operated And he already has an hour scheduled for surgery on his right knee for this Friday, in order to reconstruct what has been torn from the medial collateral ligament in that area.

The time that he will have to be off the courts will be determined once the operation is completed and the damage suffered is seen in situ, but it is a fact that he will be, at least three months off the pitch, which will almost certainly lose all that remains of the National Championship, whose end is scheduled for late January.

See Also:  Walking: the benefits at the heart of one of the most complete exercises