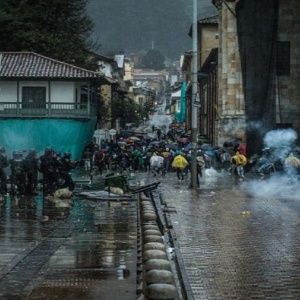 Organizations, social movements and political groups continue protests in Colombia for the fourth consecutive day this May 1, within the framework of International Workers’ Day, in rejection of the tax reform dictated by President Iván Duque.

The marches have been held from different parts of the country. In Bogotá (capital), citizens demonstrate in the streets in repudiation of the repressive policies against the Colombian people. “Here are the people in the streets organized, fighting for a dignified life” expressed the popular sectors from the town of Bosa in Bogotá.

The social organization Congreso de los Pueblos from its Twitter account reported on the arrival this Saturday of the Indigenous Minga to Puerto Resistencia in Cali, one of the main points of concentration in the capital of the department of Valle del Cauca.

The People’s Congress also specified that this “May 1st in the south of Bogotá the people are still in the streets despite the threat of the public force and the national government.” The organization denounced repression by the Police against concentrations in the city of Pereira, located in the department of Risaralda.

“We call for them to provide guarantees for social mobilization. Protesting is a right, “said the social movement. Similarly, local media pointed out that the Mobile Anti-riot Squad (Esmad) continues to repress the mobilization in Barranquilla, violating human rights, preventing people from exercising their right to protest.

In Catatumbo, blockades and educational seminars on tax reform are held, they reject forced eradication operations in the region and the return of aerial sprays with glyphosate.

In the same way, the people of Popayán, in Cauca, after more than 80 years, mobilized on the first of May, against the tax reform and in rejection of the repressive policies of the Duque government, according to Colombia Informa.

Protests and demonstrations against the tax reform continue in the streets of the Colombian capital and Labor Day is commemorated. @teleSURtv pic.twitter.com/67lV5qXHVD


The governor of Antioquia, Luis Fernando Suárez Vélez reported this Saturday of the new decree that governs said Colombian department, “the curfew goes from 32 to 9 exceptions (…) only the purchase of food or basic necessities will be allowed through domicile ”, he added.

For its part, the report presented on Friday by the Francisco Isaías Cifuentes Human Rights Network, in addition to the eight deaths reported in Cali, the police action has left a balance of 84 people taken to police stations, 28 injured, three protesters missing , three people who lost an eye, as well as a woman sexually abused by an Esmad agent.

Thinking about taking care of life and avoiding crowds, @GobAntioquia will issue a Departmental Decree with total restriction to mobility from noon today until 5:00 am on Monday, May 3.