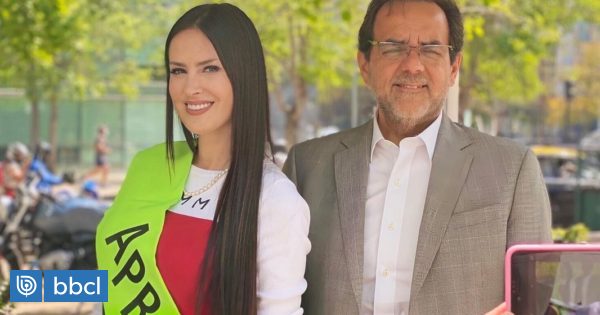 Matches of Wide Front they arrived during this day to the Forest Park to announce their guidelines for the next election of councilors, mayors, governors and constituents.

In the instance, different faces of the sector expressed their annoyance at the registration of the ex-model Adriana Barrientos as a candidate for constituent of the Social Green Regionalist Federation (FRVS), part of the I Approve Dignity pact.

Barrientos, candidate for the district 13 made up of the communes of El Bosque, La Cisterna, Lo Espejo, Pedro Aguirre Cerda, San Miguel and San Ramón, indicated on social networks that it will participate in the process because “if the same old politicians follow, the country will continue the same, in the same conditions”.

Her candidacy caused annoyance in the Frente Amplio since the former model has a past of comments on social networks that differ from the conglomerate’s political position, expressing her closeness to the Armed forces and being contrary to abortion. However, now he assured that his perception has changed.

On Twitter, he commented that he is not a pinochetista and that she is only close to the Armed Forces because she was part of them (she was in the Military School). She also said she is in favor of abortion and is a defender of human rights.

“After the social outbreak I also changed and I am giving the people who love me this new look of a more just and beautiful Chile for all ”he added.

Deputy Diego Ibáñez pointed out that it is inconceivable that a candidate who has demonstrated in favor of the dictatorship is on the list of Approve Dignity and added that it is a mistake that the Social Green Regionalist Federation must remedy.

That is how the deputy, Marcelo Díaz, leader of the UNIR movement, part of the Broad Front, also considered it.

In conversation with La Radio, the president of the Green Social Regional Federation, deputy Jaime Mulet, ruled out the decline of the candidacy and stated that on October 18 Barrientos changed his perception.

Barrientos’ controversy joins the controversy in Chile Vamos, after the Republican Party imposed the candidacy of Teresa Marinovic for District 10, which generated division in the ruling party.

Pharmacies are also allowed to inject: Johnson accelerates the vaccination

Outcry in UK over distribution of ‘insulting’ food packages