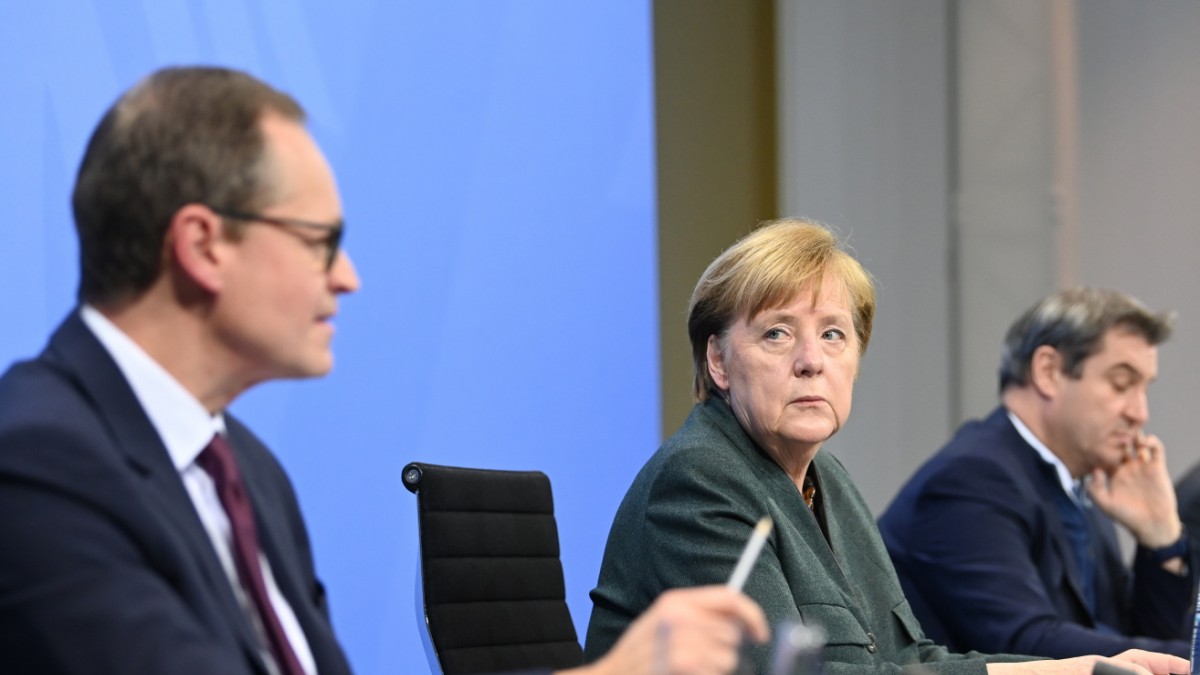 Shortly before the end, Angela Merkel speaks directly about how she sees the schools. “It is a great effort,” admits the Chancellor. “I don’t want to deny that at all.”

After Merkel has agreed with the Prime Minister to keep the schools closed, it could be up to eight weeks for many children and young people who have been at home since mid-December without seeing the inside of the classroom. That should only change sometime in February – and only maybe. On the other hand, says Angela Merkel, if you got conditions like those in London, “then we no longer talk about schools at all, but only about ambulances and overcrowded hospitals.”

London has become a kind of Bergamo New Year

It’s 10 p.m. on Tuesday evening. Again it was such a tough fight. Again the Chancellor and the Prime Ministers met for more than seven hours via video conference. The mutation of the coronavirus, B.1.1.7, now dominates all debates. And London, where the number of infections has probably exploded recently because of the new type of virus, has become a kind of Bergamo of the New Year: a chilling example to make it clear what you want to prevent at all costs.

All restrictions that already apply will be extended again. In addition: The mask requirement is tightened, in shops and on buses and trains only medical mouth and nose protection is allowed. The Chancellor said that it was “tough what we now have to expect the people to do again.” But for them and the prime ministers the principle of precaution has priority. “We took that into account today.”

Prevention. Merkel repeated this word several times in the press conference. For weeks or months you always looked at the infection numbers, the curves, the R values ​​and the occupancy of the hospitals. It was a kind of follow-up care because, strictly speaking, all these numbers represented the previous infection history. Suddenly now the view goes forward, strictly speaking, nowhere.

Now you fight an opponent who is not really there yet. Because the new virus variant, which is said to be so much more contagious, has already been detected in Germany, but only in individual cases. And that’s exactly how it should stay.

Dealing with schools and daycare centers was the biggest problem in the video conference, again. This is one of the most sensitive issues, a particularly difficult decision. The many interests that play a role here, the good reasons for restrictions, but also the understandable concerns, are symbolic of the complicated deliberations of politics in this crisis.

The Chancellor says there are “serious indications” that the mutation of the virus is spreading more widely among children and adolescents than the first variant. Therefore, the decision of December 13th is being extended, according to which schools and daycare centers are to remain closed in principle, but at least the presence requirement is no longer required. This sentence is supplemented by the wording that this decision should now be implemented “restrictively”. It’s just a word. But there was a lot going on until it was in the text at the end.

“The question is: are we playing it safe or playing it unsafe?” This is how Merkel formulates the alternative in the afternoon when point 5 is called for the first time in the video conference: schools. If it is up to her and Helge Braun, the doctor and head of the Chancellery, they should remain closed in seven days in regions with more than 50 infections per 100,000 inhabitants. “That is important to us,” says Merkel. For them it is part of the “precautionary principle”.

Several prime ministers, especially from the SPD, disagree. You take the mutation seriously, says Lower Saxony’s Prime Minister Stephan Weil, for example. But you also have to keep an eye on possible harm to the children who cannot go to school. On the Union side, too, there are voices that aim to relax the elementary schools.

Hesse’s Prime Minister Volker Bouffier warns that the weakest are particularly affected by the consequences of the closings. Merkel receives clear support in this phase only from Bavaria’s Prime Minister Markus Söder.

There is also a dispute when it comes to home office

With a view to schools, the Chancellor is again promoting an effort, at least for a few weeks, so that we can then relax. “We all put out the fire every day,” she says, referring to particularly vulnerable groups of the population, “we are all exhausted”.

The schools are supposed to have been “generally closed” since December 15th. However, the Chancellor finds that the previous resolutions have been interpreted too lightly by some countries – too many exceptions. “We have a great deal of diversity in schools in Germany,” she complains.

After a first unsuccessful round, the topic is postponed until the end of the session. For a long time, there has been advice on how to increase the number of workers in the home office. There is the next argument. Merkel thinks that Labor Minister Hubertus Heil is always making new demands on the economy. The SPD thinks that the Union side leaves employers too easily out of responsibility. Heil explains his suggestion again so that Merkel does not become “even more bad faith”, as he says. The Chancellor replied: “I will.”

The situation escalated when Mecklenburg-Western Pomerania’s Prime Minister Michaela Schwesig said that the opportunities for children could not be restricted, but nothing could be changed in the world of work. Merkel is said to have said that she would not be hooked on to torture children or disregard employee rights. So it reports it picture-Newspaper.

Participants confirm that the Chancellor was very angry. Other minister-presidents intervene, Malu Dreyer from Rhineland-Palatinate tries to relax and appeals that everyone should change the tone again. Schwesig tries to joke: It is time, she is quoted, that the restaurants reopened so that one could have a glass of wine together to relax.

But the battle is not yet over. In the evening the topic of school is raised a second time. Again it is about a possible opening of the primary schools. Markus Söder warns: If such a formulation is adopted, “then I will block the whole decision”. Schleswig-Holstein’s Prime Minister Daniel Günther agrees. If some countries started to open primary schools, the others would come under “massive pressure”.

Shortly after 8 p.m.: The session was interrupted. Merkel, Söder and Berlin’s Governing Mayor Michael Müller, acting chairman of the Prime Minister’s Conference, who are in the Chancellery, retire to Helge Braun’s office, while Vice Chancellor Olaf Scholz is connected.

Then the agreement. Compulsory attendance remains suspended, schools are “basically closed,” restrictive implementation “until mid-February. The Chancellor reported frankly at the press conference that they had” struggled for a long time. But she believed “it was worth it.” Less than an hour later the first Prime Minister again a special way. If the number of infections allowed, says Baden-Württemberg Prime Minister Winfried Kretschmann, the primary schools will gradually open from February 1st.